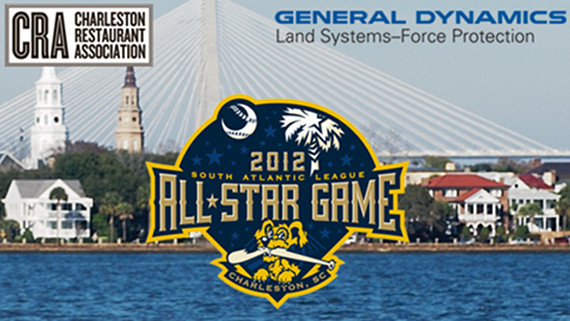 The 2012 South Atlantic League All-Star Game and festivities are set to take place in Charleston June 17 through June 19.

The game is presented by General Dynamics Land Systems, Force Protection and the Charleston Restaurant Association. Tickets are on sale now for all of the events surrounding the All-Star Game. Help plan your all-star experience by checking out the schedule of events below:

This unique experience takes place on the flight deck of the USS Yorktown. Come watch the sluggers of the S.A.L. smash home runs in to Charleston harbor! This event is free, and includes access to the Yorktown if you mention the code "All-Star" at the gate.

The 2012 S.A.L.All-Stars will be introduced and the 2012 Hall of Fame class will be officially inducted. This Hall of Fame class includes RiverDogs co-owner Bill Murray, Charleston Mayor Joe Riley, and longtime Asheville Tourists operator Carolyn McKee. The keynote speaker will be New York Yankees General Manager Brian Cashman. This event takes place at the Charleston Marriott Hotel at 179Lockwood Boulevard. Limited tickets are available to the public. To purchase tickets to the Hall of Fame Luncheon, click here.

Outside the gates to Riley Park a FREE fan fest will take place including music, inflatables, interactive games, face painting,and more! Both S.A.L. All-Star teams will be on hand to sign autographs from approximately 2:30-3:30 p.m.

Update June 12: The ten participants for the Miller High Life Home Run Derby from the deck of the USS Yorktown have been chosen.

Update June 13: Every All-Star Game has the fans in mind, and when the Charleston RiverDogs host the 53rd version of the South Atlantic League’s extravaganza, there will be a parade that leads to the event’s FanFest.

At 2 p.m. on Tuesday, June 19, the RiverDogs will begin their unique version of FanFest that is sponsored by Rick Hendrick Jeep Chrysler Dodge with a parade that will be led by its grand marshal, Bill Murray, who, within the previous hour will have been enshrined in the league’s Hall of Fame.

Murray will lead a procession that begins at the Charleston Marriott on Lockwood Blvd., and will show the way to the free FanFest that will be held in front of Joseph P. Riley, Jr. Park.

The parade will consist of dancers, Little League baseball players, the music of the Charleston Police Pipes and Drums, General Dynamics Cougar and Buffalo vehicles, fire trucks, media vehicles and, of course, the participants in the All-Star Game that will begin at 7:30 p.m. at Riley Park.