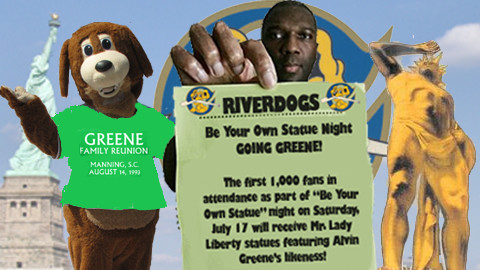 Update July 18: And the RiverDogs have won the game on the big giveaway day. Good for them.

Update July 16: So, what does Alvin Greene think about the RiverDogs promotional giveaway? He wished they'd put more effort into creating his likeness out of a Mr. Lady Liberty statue.

Asked what he had in mind, Greene responded, "As long as it looks good, like me, it’s fine."

First reporting: The creative minds over at the RiverDogs have come up with one spectacularly hilarious giveaway: Mr. Lady Liberty statues with Alvin Greene's face on them.

The statue is a combination of two off-the-wall ideas proposed in the state this year, the first being the parody of the proposed Joe Riley Lady Liberty statue in Charleston Harbor and South Carolina's surprise Democratic U.S. Senate nominee Alvin Greene's idea to create jobs by manufacturing actions figures of himself.

Taking a cue from the Manning native, the RiverDogs will set up an "economic stimulus" station on the stadium's concourse. Special workers -- hired specifically for this game -- will be available at the station to place cutouts of Mr. Greene's face on fans' statues, completing the ultimate "Mr. Lady Liberty" figurine.

NBC News 2 reporter Larry Collins posted a photo of the assembled action figure, a statue with Alvin Greene's photo taped on the head.

Statues will be given away to the first 1,000 fans who come to the July 17th game versus the Augusta GreenJackets. Tickets to the game are on sale now.