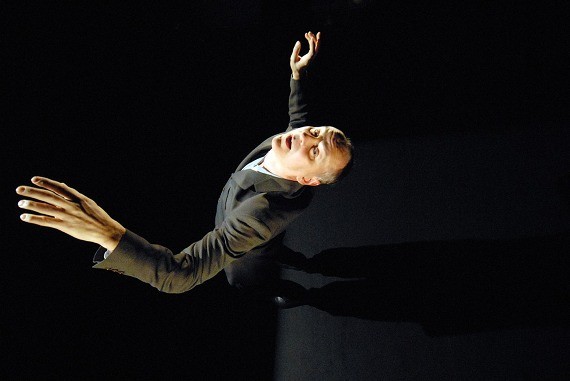 5:17 am on Wednesday June 2, 2010 | Posted by Amanda Click
A captivating look at self, will and connections in 'This Is What Happens Next'

A series of events in Canadian stage actor Daniel MacIvor's life has brought him back onto the stage for his first one-man show since 2007 in 'This Is What Happens Next.'

Read more stories on this subject in our Spoleto topic page.The performance is a tour de force in which he plays a variety of characters other than himself, but ends up being one of the most personal and autobiographical looks at the nature of will and human connections.

The play is clearly based on recent events from MacIvor's life like his divorce, alcoholic father and issues with addiction, but as the play begins, the audience is told to take the stories with a grain of salt. Names have been changed, facts have been altered, and time and time again MacIvor reminds us that it's all just a story.

The story, which is actually a set of stories involving a very intriguing group of characters, kicks into high gear and doesn't let you go until the MacIvor's final breath. The story revolves around Warren, a gay man who has recently divorced from his overbearing, substance abusing partner and is devising a plan to get his belongs back from the house he lost in the settlement. It is hard to tell where MacIvor stops and Warren begins, as both seem to have everything in common. Warren's story flows into the story of Susan, his friend and lawyer whose life, at 57-years-old, isn't exactly what she'd hoped it would be. Susan is looking for a new love through an online dating service and finds a match in Aaron, formerly Erin, a transsexual astrologer who is striving to change the world by living to love the beauty of our bodies and dispel the modern idea that our bodies, our one and only vessels in life, are our living nightmares. Next comes Mike, Erin/Aaron's alcoholic ex-brother-in-law who can't relate to his 7-year-old son and can't put down the bottle long enough to fight for the life he once knew. Finally, there is Kevin, Mike's homosexual 7-year-old son who deals with life through telling his own fairy tales to cope with the harshness of reality.

The entire performance is a series of conversations about the nature of will, narrated by MacIvor's last character named Will, a man who is a profound pessimist and promises us that there are "no real happy endings." Luckily, MacIvor steps back in at the end and gives the audience two endings to the story. One happy, one tragic.

The beauty of this show is that it is happening in the now. This is MacIvor's life, and it's still an ongoing piece of work, will, connections and stories. When the performance is over, you're left wondering what will happen next for not only MacIvor, but for all of us. It makes you feel, it makes you wonder, it makes you remember and it makes you hope that with each passing moment and each choice you're shaping an acceptable future.

Witty, amusing, dark, reflective, powerful and hilarious aren't words often used to describe a single performance. But I'm going to go ahead and leave you with this and let you make of This Is What Happens Next as you will. No pun intended.

There are three more performances taking place on June 3rd, 5th, and 6th with tickets on sale here.