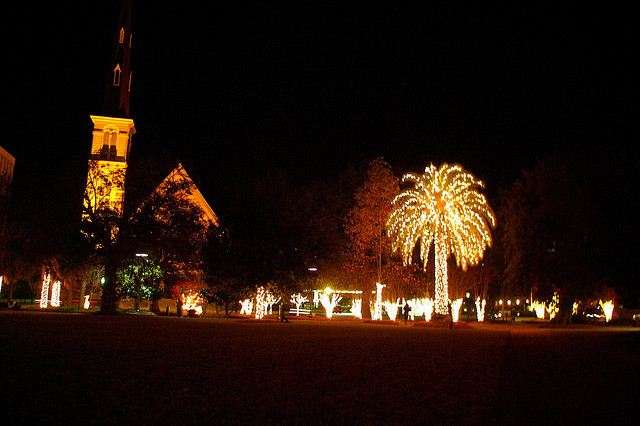 1:35 pm on Saturday November 27, 2010 | Posted by Ken Hawkins
Charleston and North Charleston Christmas parades and festivals and events, oh my

Image by Ken Hawkins/TheDigitel Christmas lights in Marion Square are set to be lit on December 4.

Now that your belly has been stuffed with turkey and your toes trampled by deal seekers it's officially the Christmas season and there's more than a few events marking the occasion.

We've split this one into two parts, Charleston and North Charleston.

Christmas in the City of Charleston

For the month of December, the Marion Square will be lighted and decorated for the holidays, including the 60-foot Holiday Tree of Lights, a Chanukah Menorah and a Kwanzaa Kinari.

"Holiday Magic" festivities officially kick off in Charleston on Saturday, December 4, during the 24th Annual Tree Lighting Ceremony. Santa Claus and many special guests will help light the official City of Charleston Tree, a 60-foot tree-of-lights in Marion Square.

The winners of the Annual Tree Decorating Contest, which will line the gravel paths of the square, will also be announced at the Tree Lighting Ceremony.

24th Annual City of Charleston Tree Lighting Ceremony is on Saturday, December 4, at 4:30 until 6:30 p.m. Join the cast of holiday characters, including of course, Santa Claus himself in lighting the magnificent 60-foot Holiday Tree of Lights, the official City of Charleston Christmas tree in Marion Square.

30th Annual Holiday Parade of Boats on December 4 at the  Mt. Pleasant waterfront at 5 p.m. with viewing from the peninsula begins at 6:30 p.m. Get on board with a Lowcountry holiday tradition as this display of lighted and festive boats proceeds through the Charleston Harbor. View the procession along Charleston’s waterfront or decorate your own boat and join the parade.

30th Annual Charleston Christmas Parade on December 5 from 2 to 5 p.m. This holiday tradition is better than ever as bands, floats, marchers and performers parade through downtown Charleston. The parade begins at the intersection of Calhoun and Meeting Streets, proceeds down King Street to Broad Street to Lockwood Blvd. Sponsored by the Tri-County Fire Chiefs Association.

Chanukah in the Square on December 5 in Marion Square from 4 to 6 p.m. A festive party for everyone, featuring music, dancing, lighting of the nine-foot Menorah by Charleston’s Holocaust survivors, crafts and many treats, including latkes and other traditional Chanukah foods. Sponsored by Piggly Wiggly.

"Happy New Year, Charleston!" on December 31 in Marion Square and surrounding locations from 4 to 10:30 p.m. This high-energy arts celebration offers a non-alcoholic event featuring family-oriented concerts and presentations to mark the New Year in Charleston. More details later in the year.

The Holiday Farmers Market will run December 4 to 19 at Marion Square on Saturdays from 8 a.m. to 4 p.m. and Sundays from 10 a.m. to 4 p.m. You’ll find everything you need to deck the halls for the holidays and fill the pantry with baked goodies, all from local farmers and artisans, including natural wreaths, fresh greenery, special breads, cookies and fresh vegetables, as well as the best assortment of art, crafts and holiday gift items.

Don't forget if you're planning to visit downtown to do some shopping there's a free two-hour parking voucher.