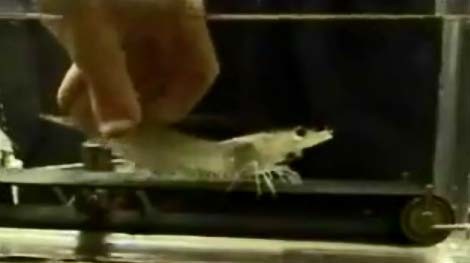 Update November 25: The big day has come, go check out the clip.

Original post: The College of Charleston's scientist behind the near-infamous "Shrimp on treadmill" YouTube video is bring his experiment to the Today Show on Tuesday, November 25.

Here's a bit about the experiment from the college's press release:
This seafood phenomenon started as a simple investigation on the impact of bacteria on shrimp.

Lou Burnett of the College of Charleston’s Grice Marine Lab came up with the concept of putting a shrimp on a treadmill after trying to figure out how to measure the impact a bacterial infection has on shrimp.

Normally, shrimp are always “running” in search of food or away from predators. But like humans, when a shrimp is sick with a bacteria infection, it doesn’t want to move at all. Burnett and his team built the mini treadmill in order to create a “stress test” for the shrimp and measure the impact an infection has on a shrimp.

The study shows that when the animals are infected by a common bacteria, their immune systems respond by producing blood cells called hemocytes. The blood cells can clog the shrimp’s gills, making it difficult for them to breathe and draw in enough oxygen for their bodies to run efficiently. The shrimp then slows down and becomes an easy target for predators.

Burnett's research has expanded to, in part, monitor crabs' reactions on treadmills.

Why, two years after the Internet sensation appeared, they've decided to feature it, I don't know.