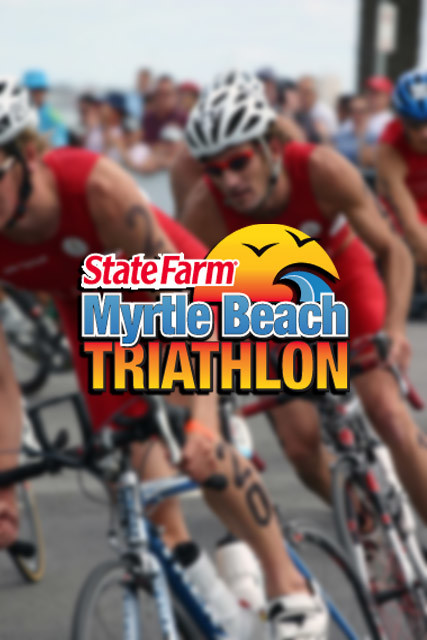 Update 10/10:  Jarrod Shoemaker and Gwen Jorgensen were the winners of the State Farm Myrtle Beach Triathlon.  Jarrod was in the 2008 Olympics and Gwen will participate in the 2012 games.

Pre-race, Gwen Jorgensen tweeted, "@jarrodshoemaker I will bring my cyclecross bike for sure...but will also need some tips for races! can't wait﻿"

On Saturday, following the triathlon, Jarrod Shoemaker tweeted, "Really excited for the win in Myrtle beach. Long hard season excited to be back racing and happy!"

Congratulations to all participants!  You can find a race report over at WPDE.

Update 10/3: This Saturday, October 8th is the Myrtle Beach Triathlon and that means there will be a  road closure﻿.

A press release from the Horry County Police Department in part reads:

And it's not too late to volunteer for the Myrtle Beach Triathlon, just head on over to the Chamber of Commerce's blog and let them know you want to help out!

If you'll be at the triathlon, either volunteering or rooting someone on, and you're a part of the social media craze known as Twitter and or Facebook make sure to Tweet your pics with the Hashtag #MYRpix and or #MYRtriathlon also post the pics of links to our Facebook wall.

First Report 9/2:  The State Farm Myrtle Beach Triathlon will be held on Saturday, October 8 at the Marina Inn at Grande Dunes﻿. This is the last in a series of six races designed to prepare the US Triathlon Olympic Team for the London 2012 Games.

The Facebook Event for the Myrtle Beach Triathlon states:

Myrtle Beach is one of the most exciting triathlon venues we have seen in the sport. Closed bike and run courses highlight the incredible effort the city and county have put forth for this event. The event will host the USAT Club National Championships and the TriSports.com Halfmax National Championship. Both Championships will be staged on the same day. ﻿