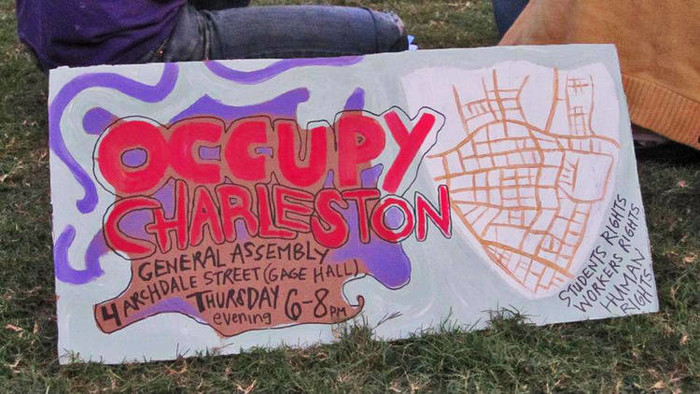 1:38 am on Tuesday October 18, 2011 | Posted by Ken Hawkins
#OccupyCharleston strategizing a Charleston occupation

Update: The #OccupyCharleston movement has approval on a permit request to camp out in Brittlebank Park for 99 hours on October 19th through the 23rd.

And, in a sign of the times, learn what you need to know at the Facebook event.

The Post and Courier﻿ has published a preview of the event that gives an idea of the broad types of people coming out, what will happen at the rally, and what the demonstrator's demands are.

You've heard of how similar "occupy" movements have spread across the nation and the world.

And you've heard about the chaos that has crippled their ability to deliver a cohesive message.

Well, inspired locals are looking to gain a toehold occupation in Charleston — but without the chaotic downside. Before holding its first "occupation," #OccupyCharleston is holding regular meetings on Thursdays and an "action" meeting this Sunday.

The reason? They want structure and organization, and a cohesive set of demands.﻿

There's a slew of more coverage out there (check out the "full coverage" links below) but the better report I've seen on the vibe thus far is at The College of Charleston's Cistern Yard; take a read here.

We'll keep you posted on the coverage and events that are sure to come and you can connect directly with the group on their Facebook page.