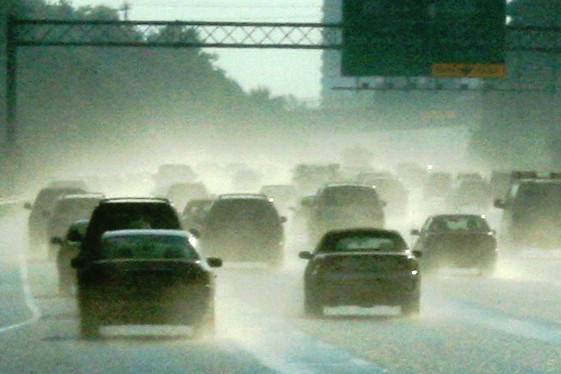 3:51 am on Monday September 27, 2010 | Posted by Ken Hawkins
More rain, thunder forecast in store for Charleston on Monday (updated)

Update September 28: Get the day-after coverage of the flooding here.

As of Monday night at 9 p.m. Charleston had been doused in an inch-and-a-half of rain, and more of the same is likely in store for us Monday, particularly in the afternoon, along with a threat of tornadoes.

The National Weather Service writes that not only will rain likely be around Sunday night but on Monday there will likely be "severe thunderstorms ahead of a strong cold front Monday afternoon and evening and a few thunderstorms could become severe with damaging winds large hail and even an isolated tornado, especially between 2 and 11 p.m."

Stay cautious on the roads and watch for flooding particularly during heavy rains around high tide at 10 a.m. and 10:30 p.m.

We'll keep you posted on changes.

The forecast high and low are 85 and 68, respectively.

Update September 27, 7:45 a.m.: Heavy rains have continued spuratically throughout the night with about an inch-and-a-half falling at the Charleston Air Force base last night and early this morning.

We're currently in a significant pause in the rain over the Charleston metro area but another mass is approaching and forecasters have the most concern from 2 p.m. throughout tonight as more rain will fall along with potentially damaging winds, lightning, and a possible tornado or two.

A quick check of area traffic cams looks like morning traffic has been relatively unfazed south of Ashley Phosphate, normal traffic woes seem to persist above that road. However there is one accident near the 214 Mile Marker of I-26 with the left lane closed.

We'll keep you posted on changes to the forecast and traffic.

Don't forget to tune into #chswx and #chstrfc for up-to-the-second info.

The expect high and low have been shifted down to 83 and 65.