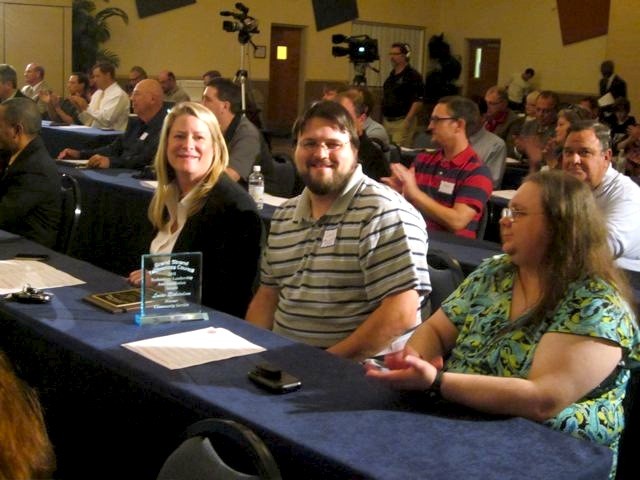 Flickr user Jitter Buffer
Sheila Butler, CIO of Horry County, sits with Lucas Richardson, winner of the Technology in the Community award for 2011.

November 18th: A large crowd representing the best of Grand Strand's technology professionals gathered at the first annual Technology Leadership & Innovation Awards to be recognized for their efforts on Thursday evening.

Winners in the 3 categories were:

Technology & Service Advancement﻿: Jason Essary & Holly Legg of Coastal Carolina University﻿ for their efforts in a system called TEAL Online which is a digital repository for collecting and distributing data.

Technology in the Community:﻿ Lucas Richardson of Horry County Government﻿﻿ for his work on the online video presentation of the Horry County Council meetings.

Technology initiated in Education and/or Charity:﻿ There were two winners in this category. Virginia Simmons of Horry County Schools﻿﻿for her leadership role in the adoption and use of technology at the Horry County Schools Adult Education Center. And Marino De La Cruz of Mercom Corporation﻿for their charitable endeavors.

Grand Strand Technology Council Founder and Chairman, Dr. John Sanders, believes that the Grand Strand is poised to be a technology hub for the region. "We have the telecommunications infrastructure and amenities to support it," Sanders stated. "We don't need an I-73 to get started, either. The iTAP project will bring many new opportunities for us as well."

November 17th: Just a bump to the top to encourage locals to support technology efforts in our area.

Winners will be announced at an awards ceremony on Thursday, November 17th at 4pm in the Horry Georgetown Technical College Conference Center.

First Report: The Technology Leadership & Innovation Awards﻿ are almost upon us and the Grand Strand Technology Council wants to hear from you.

Each year the Grand Strand Tech Council seeks to find those individuals and companies that are bringing technology innovations, development and community to the Grand Strand.

The 2011 Technology Leadership & Innovation Awards are focused on the Grand Strand business, education and government communities. These awards will be presented at an awards ceremony to be held in the Fall 2011.﻿

The awards can't happen without community involvement and The Grand Strand Technology Council is seeking your input and who should be considered.

Nominations may be made by anyone, and the winners will be selected by a distinguished panel of judges.﻿

Leadership & Innovation can be nominated in one of three categories:﻿

Tom Rice, chairman of the Horry County Council has this to say about technology in the area, "Horry County is building a more stable economy and increased wages through growth of our industrial and technology base. The Technology Leadership and Innovation Awards are important as they recognize those persons stepping out in front."﻿

Do you know someone, a company, business or orginization that should be recognized and nominated for the Technology Leadership & Innovation Award? If so hop on over to GSTechAwards.org and throw a nomination their way but hurry nominations will be closed August 31st.