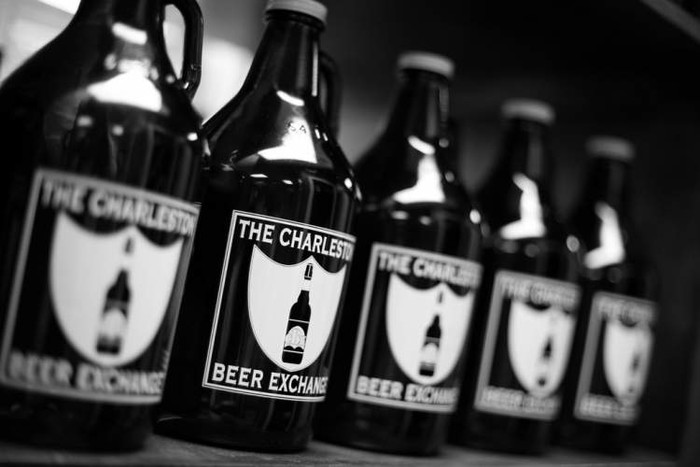 If CBX running two Dogfish Head Randall 3.0's simultaneously on the growler station wasn't outrageous enough for you, what they're running through them certainly should be.

The more pedestrian (though still exciting) selection is Dogfish Head Chicory Stout (5.2% ABV, B+, 95) run through the Espresso Dark French Roast of downtown's own Charleston Coffee Roasters.  It's whole bean, so no worries about grounds in your grill.

Second, in a Randall run to end all Randall runs, they are running Dogfish Head Festina Peche (4.5% ABV, B, 74), a mildly sour Berliner Weisse made with peach concentrate, through a mix of dried apricots and Sour Patch Kids.  Uh huh.  Before you rightfully call them crazy, please note that they are quick to give full credit to the Dogfish crew, who specifically requested both Randall configurations for Tuesday.

Monday, November 15th marks the official two-year anniversary of the Charleston Beer Exchange, and the gang is celebrating with some very cool growler events.

Coincidentally, craft beer giant Sierra Nevada shares the same anniversary, although they are chalking up 30 years on Monday.  Their celebration has been going on all year, with the release of four collaborative 30th anniversary brews, the fourth of which was just released.  CBX will be placing all four on the growler station Monday.  The brave souls that purchase all four will receive "an extra special, beautiful Sierra Nevada 30th Anniversary commemorative snifter style glass!"  Ready your palate & gullet for these beauties:

It's right back to Rare Beer Tuesday, on, well, Tuesday, with a serious Dogfish Head event.  Scant details are available via the CBX blog:

Claus Hagelman of Dogfish Head will be joining us from 4:30 p.m. to 6 p.m. to launch/debut our new "Dogfish Head Randall 3.0" program and we'll be doing two different Dogfish Head beers through two Randalls with some very crazy special treatments! Stay tuned to Monday's announcements for the specifics but prepare for some really wild stuff! If you're not sure what we're talking and/or saying "What's a Randall?" check this link out: Ranall The Enamel Animal. Lots more to come on this!

On a personal note, congrats to CBX for two years of success!  You boys have done more than you may know for beer culture in the Lowcountry.  Conversely, you know exactly how much you've done for my bank account.