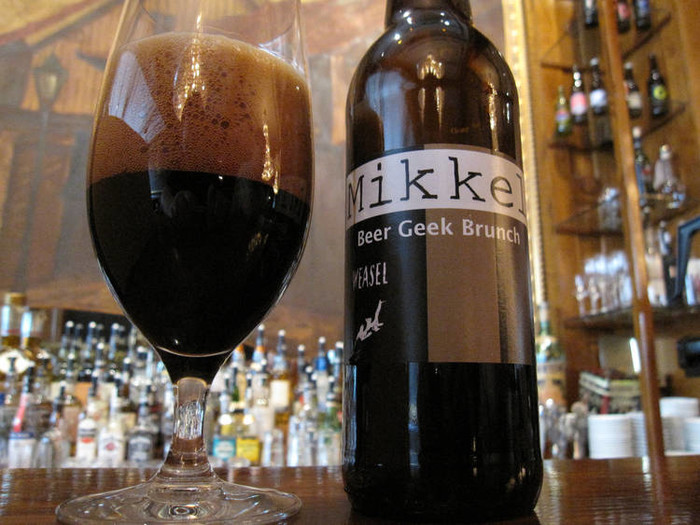 The Charleston Beer Exchange boys are putting a rarified, delicious, and peculiar beer on the growler station for Rare Beer Tuesday this Tuesday at 5 p.m. - Mikkeller Beer Geek Brunch Weasel.

Let's ease into this one.  Denmark's Mikkeller is the brainchild of Mikkel Borg Bjergsø﻿, one of the originators (if not THE originator) of the "gypsy brewing" model, whereby the brewer does his thing at various established breweries instead of owning and running his own real estate.  He is responsible for having produced nearly 250 different beers (including many barrel-aged variations on some of the same base beers).  In his own roughly-translated words from the official Mikkeller site:  "Mikkeller is possibly the most productive brewery in the world. Alone in 2010, [he] launched 76 new Mikkeller beers.﻿"

One of Mikkeller's mainstays is Beer Geek Breakfast (7.5% ABV, A-, 100), both one of the most available and well-loved of his offerings.  25% of its malt-bill is "oat-based", making it an oatmeal stout at heart, but the addition of fine coffee beans and its high-ish ABV make it a truly magnificent imperial stout.  Recent variations on the theme have included Beer Geek Bacon (with the addition of some smoked malts), and Beer Hop Breakfast ('nuff said).

Before these variations, there was another beer inspired by Beer Geek Breakfast, but truly its own...animal.  Beer Geek Brunch Weasel (10.9% ABV, A, 100) is a real...beast.  Like its lesser cousin it's an imperial stout brewed with a oats, although Brunch Weasel has a significantly higher ABV.  But the real difference here is the addition of Vietnamese cà phê Chồn﻿ coffee - a.k.a Kopi Luwak, a.k.a civet coffee.

Coffee fanatics will recognize this instantly as one of the most expensive coffees in the world.  Non-coffee fanatics should brace themselves.  The beans are of the highest possible quality, thanks not so much to the farmers as to the Asian Palm Civet, a discerning eater if there ever was one.  The weasel-like mammals will only eat the finest coffee beans, which are later harvested from their droppings.  Since they only digest the flesh surrounding the coffee bean, they leave behind perfect beans, valued at hundreds of dollars per pound (after washing).  This coffee does unspeakable things to the beer, imparting a depth of coffee flavor that is unmistakable.  Coffee fans, stout fans, and all-around adventurous drinkers should definitely...pounce on this.

Charleston Beer Exchange never lets you down (or runs around and deserts you) at 14 Exchange Street downtown.