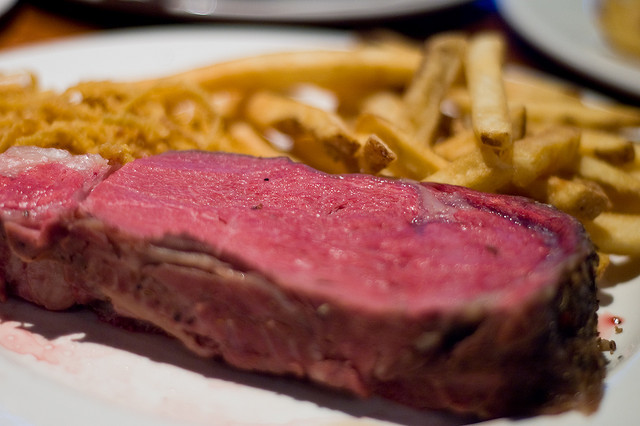 Update 10/18/12: This Saturday, October 20th, customers will walk through the historic doors of Cagney's for the last time.

After 30 years the Dinos will be serving their crowd pleasing prime rib for the last time at this Myrtle Beach dining legend. But, have no fear, the Dinos' other restaurant Flamingo Grill will remain open and they serve quite a few of Cagney's tasty dishes.

So if you want to enjoy the atmosphere of Cagney's Old Place you only have a few more days.

WBTW reports that, "There's no word on what, if anything, will replace Cagney's." Additionally they have some pretty interesting facts taken from one of Cagney's owners Dino Thompson regarding how many restaurants have come and gone during Cagney's 36 year history.

Read all about it here.

Becky Billingsley of Myrtle Beach Restaurant News has more info on the closing of Cagney's. According to her write-up and a letter from Dino Thompson, one of the owners, Cagney's lease is up soon and they won't be renewing it.

But have no fear, Flamingo Grill, Cagney's sister restaurant will remain open. Hop on over to MBRN for all the details.

'Banana' Jack Murphy, a Myrtle Beach legend in his own right and friend of TheDigitel told us:

" I'll miss Cagney's because it oozes history. Everything in the place has a story. It's not just Myrtle Beach history either. You could write a book filled with stories on the origin and history of all the items in that place. Cagney's to me is a museum with some mighty tasty vittles. For so many patrons, it's going to feel like the loss of a loved one. "

First Report 8/22/12 1:20 p.m.: Myrtle Beach staple and the reason for Restaurant Row, Cagney's Old Place will be closing down for good soon, or so rumor has it.

Since May of 1976, Cagney's has been making happy dining customers out of locals and tourists alike. Normally, Cagney's closes its doors in the fall. The restaurant is locally owned by two life long friends both named Dino - Dino Drosas and Dino Thompson.

One of the key features of Cagney's, besides their prime rib, is they saved the doors from the long gone Ocean Forest Hotel, one of Myrtle Beach's first major hotels. Cagney's has been serving Myrtle Beach for 36 years and in that time they have amassed quite the reputation and they have a page dedicated on their website to guest memories which you can read here .