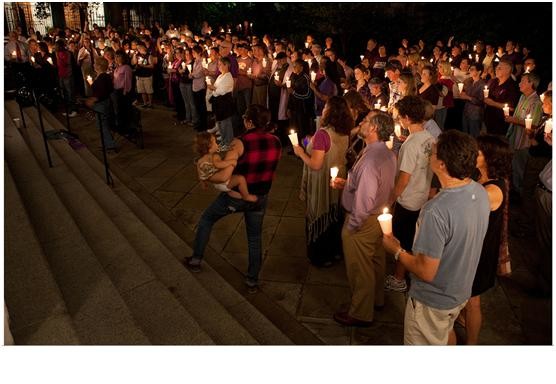 9:00 am on Tuesday October 25, 2011 | Posted by
'It Gets Better, Charleston' candle light vigil to stop anti-gay bullying

We Are Family and the College of Charleston Gay-Straight Alliance (GSA) will host the second annual “It Gets Better, Charleston” vigil to show support for gay, lesbian, bisexual, and transgender (GLBT) youth and to remember the many gay teens who took their own lives last year.

The vigil will take place on Thursday, October 27 from 6:30-7:15 p.m. at the College of Charleston Multicultural Student Center, 207 Calhoun Street in downtown Charleston.

The event will be followed by a screening of “Out in the Silence,” an inspiring documentary about courageous local residents confronting homophobia in their Pennsylvania town.

Among the lineup of speakers is Hanahan Mayor, Minnie Blackwell, who issued a proclamation of support for the establishment of a GSA at Hanahan High School last year.

“Laws like the recently repealed ‘Don’t Ask, Don’t Tell’ teach kids that it is ok to lie,” said Mayor Blackwell. “You have to be proud of who you are. As adults, educators, and individuals, we all must stand up for our children and say ‘enough with the bullying.’”

Charleston Mayor, Joe Riley, offered words of support for GLBT youth, as well. "Nothing is more important to a community than supporting and protecting its children and young people - every single one of them," said Mayor Riley.

A study by the Robert Wood Johnson Foundation showed that GLBT students in schools with GSAs and youth who lived in communities with GLBT-supportive organizations were significantly less likely to commit suicide than those who lacked access to support structures.

“Isolation is a dangerous feeling for a young person,” said Melissa Moore, We Are Family Executive Director.  “Organizations like We Are Family and campus GSAs are a matter of life-and-death for some young people.”

Other event speakers include Pastor Robert Arrington of Unity Fellowship Church of Charleston, Austin Bucholtz, Wando High School GSA President, and representatives from the College of Charleston GSA. Music by Austin Bucholtz and the band, “A Fragile Tomorrow” will lead the candle-lighting ceremony.

Head to the source at facebook.com