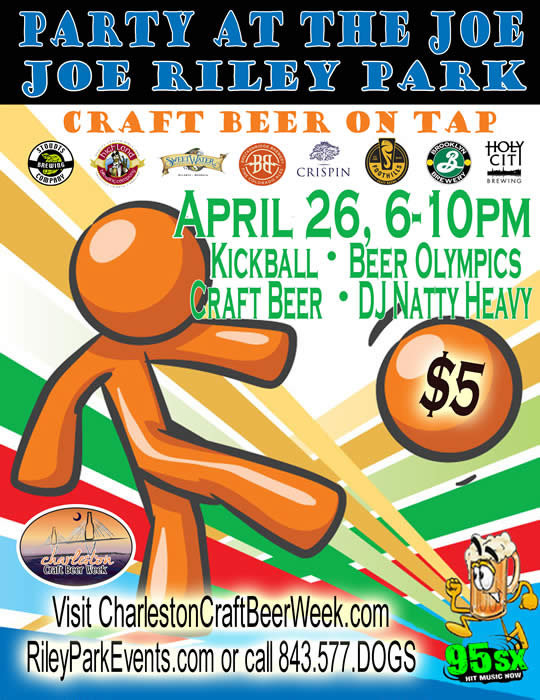 6:36 am on Monday April 23, 2012 | Posted by Amanda Click
'Party at the Joe' this Thursday with craft beer, kickball and beer olympics

Charleston’s inaugural Craft Beer Week is underway, and the Charleston RiverDogs are featuring a special “Party at The Joe” on Thursday, April 26th, at Joseph P. Riley, Jr. Park.

This special Thirsty Thursday – even though the team is in Lexington, KY for their scheduled game against the Legends – highlights craft beer specials by RJ Rockers, Foothills, Smuttynose, Sweetwater, Holy City, Dogfish Head, Boulder Beer in addition to New Holland and Stouts.

The rain-or-shine party starts at 6 p.m. with Riley Park favorite DJ Natty Heavy controlling the music. While there, be sure to cheer on the Brewers Kickball Challenge and sign up for the Beer Olympics.

Tickets for “Party at The Joe” will be $5 each at the door. While the kickball games on the field are all committed and registered, interested teams can pay the $5 admission and get into the stadium for the drinks and entertainment, including the Beer Olympics and the kickball games.