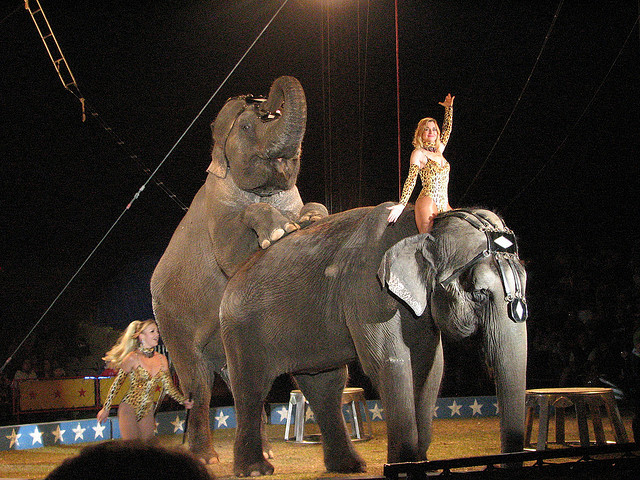 7:46 am on Wednesday September 5, 2012 | Posted by Melissa Byers
Despite animal-welfare charges, the Cole Bros Circus is set to perform in Myrtle Beach (Update)

Update September 5, 2012: It's almost the same story, just a year later.  The Cole Bros. Circus is set to perform in Myrtle Beach next after agreeing to pay a $15,000 fine to settle USDA charges against them regarding the care of their elephants and tigers.

You can read more in this press release from PETA, which includes links to pretty sad video and the full set of charges.  The show must go on, though.  They are scheduled for September 11 - 13, 2012 at 4:30 and 7:30 p.m. all three days, across from the Myrtle Beach Convention Center.  You can read more about the show and buy advance tickets on the Cole Bros. Circus site here.

First report: The Cole Bros Circus will be performing for the second time this year in Myrtle Beach on September 7 and 8, 2011.

The shows will be adjacent to the Myrtle Beach Convention Center, in the former Myrtle Square Mall location, and held at 4:30 and 7:30 p.m. each day.  Tickets are available online or at the door.  Prices range from $12 to $22.  Children under age 12 are admitted free with the purchase of an adult by using this printable coupon.

These circus performances are scheduled despite animal-welfare charges from the United States Department of Agriculture (USDA), as reported by The Sun News in this article.  Last year, the circus had complaints filed against it by the People for the Ethical Treatment of Animals (PETA) regarding the health and treatment of two elephants.  Since then, another complaint was filed in July, alleging improper treatment and care of a third elephant's medical issues.  You can read the details and see the full list of USDA charges here.  Cole Bros Circus fully denies any wrongdoing and is confident these charges will be dropped.

As they say in the entertainment biz, the shows must go on, and they will next week.  Here is a video from last April's performance in Myrtle Beach, as well as a review from Myrtle Beach Scene from their last visit.