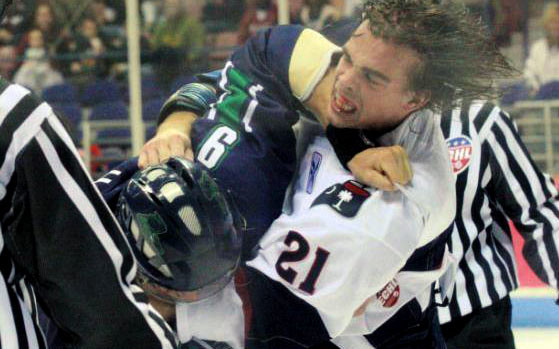 The Charleston Stingrays continue their best-of-seven game series against Florida Everblades this weekend in the South Division Finals.

Here's a bit about the upcoming games from a press release:

Certainly the Rays have had an advantage when playing at home in the playoffs over the last two season under Stingrays Head Coach Jared Bednar. In that time, the Rays are 15-13, going 10-10 last season making it to the Conference Finals. Of those 28 games, they have played 15 of them at home going a staggering 13-1-1, including going 3-0 so far this season.

In the history of the Stingrays, which includes making the playoffs 15 time, more than any other team in the ECHL, as well as playing 124 playoff games, more than any other ECHL team, they have the most home wins ever. Including the three home wins this year, the Rays have 44 home playoff wins, six more than the next closest team, the Toledo Storm.

One of the main reasons for their success at home, is the devoted fan support at the North Charleston Coliseum. For those fans who signed up for the 'Pay for Play' plan, make sure to use ticket 4 on Friday, ticket 5 on Saturday and ticket 6 on Sunday.

They say that home is where the heart is, but for Stingrays in the playoffs, home has been where the wins are. Is three more this weekend too much to ask?

Buy tickets online or at the door starting at $13.

The games will be played at the North Charleston Coliseum.