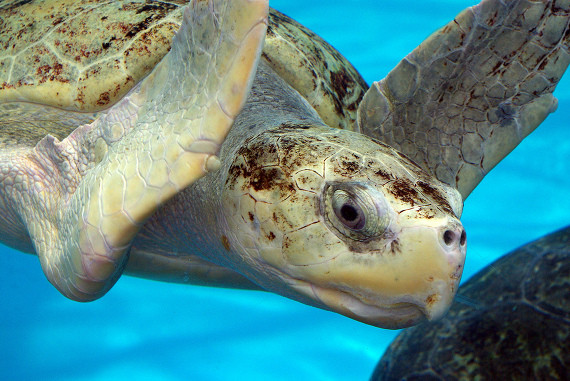 Update May 3: Nuance Pet Photos was there for the release and has some great shots of the sea turtles' return to the ocean and the crowd; see them here.

First reporting: Seven patients in the South Carolina Aquarium Sea Turtle Rescue Program have been cleared for release and will be set free into the deep blue sea this Saturday, May 1st.

Here's more from the press release:

The public is encouraged to attend this record setting sea turtle release. Onlookers will have a once in a lifetime opportunity to watch three loggerheads and four green sea turtles return to the wild. The IOP County Park's parking lot opens at 10:00 a.m. and parking fees will apply.

The public can see all seven patients at the Aquarium before the extraordinary Saturday release by participating in one of the Sea Turtle Hospital behind-the-scenes tours on Friday or Saturday at 11:30 a.m. or 1 p.m. With 14 patients in the Aquarium's Sea Turtle Hospital, the full house offers a touching educational experience. Details on each patient can be found on the Aquarium's website at scaquarium.org. Regular behind-the-scenes tours are scheduled weekly at 11:30 a.m. and 1 p.m. on Monday, Wednesday, Friday, Saturday and Sunday.

About the 45th rehabilitated sea turtle, Beasley:
A victim of the North Carolina coldstunning event during the weekend of February 6-8, 2009, Beasley, a loggerhead sea turtle, was one of only 20 (out of 109) surviving sea turtles. Arriving to the Hospital on February 11, 2009, Beasley weighed 65 pounds. Immediate treatment began with fluids, antibiotics and radiographs. The radiograph results showed signs of intestinal gas which may have been a result of decreased GI motility caused from the cold-stunning. Cold-stunning sometimes causes bacterial fermentation leading to gas in the intestines. Beasley is very active and eating live blue crabs eagerly (1 per day) and is medically cleared for release.

About the 46th rehabilitated sea turtle, Ocracoke:
Another victim of the North Carolina cold-stunning event during the weekend of February 6-8, 2009, Ocracoke was one of 20 lucky sea turtles to barely survive, , with an internal stranding temperature of only 51 degrees. Ocracoke's initial treatments included fluids, anitbiotics and radiographs. Radiograph results suggested mild inflammation in one of the Ocracoke lungs, a sign of pneumonia. The antibiotic, amikacin, was added to Ocracoke's therapy of ceftazidime antibiotics in expectation of pneumonia complications. With full recovery, Ocracoke joins the Hospital's six other patients ready for release.

About the 47th rehabilitated sea turtle, Dare:
Dare, a green sea turtle, was one of nine turtles that arrived as a result of the cold-stunning event off the coast of North Carolina during the 2009 Christmas season. At nine pounds upon its December 28, 2009 arrival, Dare received subcutaneous fluids and vitamins to combat its mild dehydration. With 60% of its carapace covered in large barnacles, Dare was immediately placed in a tank of brackish water to aid in subsequent debriding. Recovering quickly, recent radiographs showed Dare's lungs clear and free of pneumonia. Active and eating well, this little green is ready for release.

About the 48th rehabilitated sea turtle, Cluse:
Cluse was the most lethargic of the nine sea turtles that arrived as a result of the cold-stunning event off the coast of North Carolina during the 2009 Christmas season. Upon its December 28, 2009 arrival, Cluse weighed only four pounds. The animal was immediately given IV fluids and vitamins, and was placed in a shallow pool of brackish water. To prevent pneumonia, Cluse also received an antibiotic regimen. Upon completion of his antibiotic regimen, radiographs showed the animal's lungs clear and free of pneumonia. Minor damage to the upper right portion of Cluse's shell near his front flipper was also treated and Cluse's weight returned to a healthy level. Cleared for release, Cluse joins the other three green sea turtles ready for release.

About the 49th rehabilitated sea turtle, Frisco:
Frisco is one of approximately 100 sea turtles that stranded in the cold-stunning event off the coast of North Carolina during the 2009 Christmas season. Arriving December 28, 2009 at six and a half pounds, this green sea turtle was unable to regulate its body temperature due to the sudden drop in coastal water temperatures. Cold-stunning in a reptile can cause the animal to become lethargic and suffer various ailments including hypothermia, pneumonia and skin lesions. Upon arrival, Frisco received subcutaneous fluids and vitamins to aid in rehydration and was placed in a shallow pool of brackish water. To prevent pneumonia, Frisco also received an antibiotic regimen. Eating well and with its shell damages healed, Frisco joins the other three green sea turtles ready for release.

About the 50th rehabilitated sea turtle, Scute:
This juvenile loggerhead sea turtle stranded in Myrtle Beach, S.C. and was brought in to the sea Turtle Hospital on August 24, 2009, weighing approximately 90 pounds. With a history of rope entanglement around the head and neck, its carapace was completely covered with tube worms and smothering barnacles which covered 65-75% of its carapace. The turtle was very anemic, severely emaciated, and moderately hypoproteinemic. Treatment for Scute began with fluids, IV hetastarch fluids, iron, vitamin B, and antibiotics. By early 2010, Scute's prognosis looked very optimistic. An aggressive eater, the turtle consumes all of the various types of fish it is offered: mackerel, smelt or blue runner, and is maintaining a healthy weight. Also an expert at catching and consuming live blue crab, a natural food source offered as one form of enrichment, Scute has been cleared for release by the Aquarium's staff veterinarian.

About the 51st rehabilitated sea turtle, Mingo:
This juvenile green sea turtle was found floating in a creek at Mingo Point on Kiawah Island, S.C. Mingo arrived to the hospital on June 11, 2009, very thin, weighing in at only 18 pounds and with a moderate barnacle load and severe dehydratation. Its treatment began immediately with fluids, antibiotics, and vitamin injections. Radiographs informed staff that an intestinal blockage was possible which lead staff to tube-feed a fish gruel containing mineral oil. After four days of mineral oil-based feedings, radiographs showed the blockage was indeed working its way out of the GI tract. With the treatment's success, and a good blood work results, Mingo has been cleared for release.