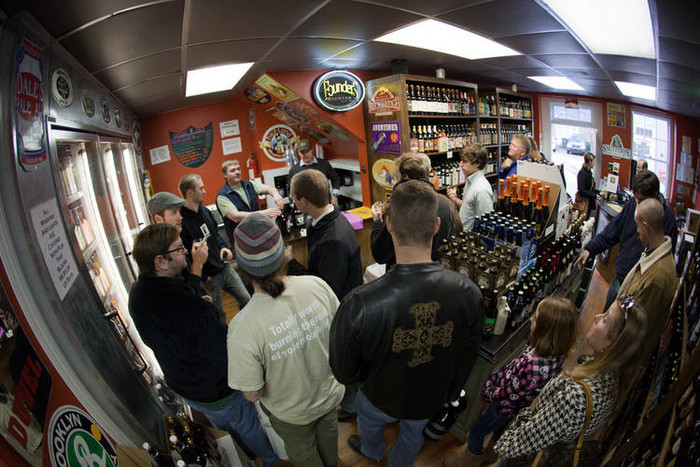 A triple-threat of local beer events are going down at Charleston Beer Exchange this week, each highlighting a different area brewery.

Rare Beer Tuesday's usual 5 p.m. timeslot is being co-opted for this year's CBX debut of The Belafonte (5.7% ABV, A-)  from COAST Brewing.  This is the second go-round for this Life Aquatic-inspired seasonal, a triple threat all by itself with a very wheaty malt bill, Belgian yeast, and a boatload of hops.  I remember these components marrying to create a refreshing hoppy wheat ale, made even more spectacular by the bubblegum aroma from the Belgian yeast's esters.  With the addition of a red cap and a little Seu Jorge, this beer may well complete your life.

North Charleston's newest brewery, Holy City Brewing, will be featured from 5 p.m. to 6:30 p.m on Thursday.  During that time you can meet the brewers, taste their wares for $0, and get a growler fill for slightly more than $0.  Their two year-rounds, Pluff Mud Porter and Pilsner, will both be on tap.  Joining them will be the first edition of their Fish Bowl series of small batch brews, an IPA made solely with Summit hops.  The porter and IPA were the featured brews at last week's Oak Barrel Tavern launch.

Lastly, a very special cask from Mount Pleasant's Westbrook Brewing will be knocked open with a large hammer Saturday afternoon at 2 p.m.  In said cask sits Westbrook's Belgian Quadrupel, a small batch of which disappeared a few weeks ago.  Said Quadrupel has been floated on Hungarian oak, which was in turn soaked in rum, with a little star anise thrown in for added insanity.  This sounds completely decadent, and as it's a naturally fermented cask ale it must be consumed very quickly, preferably even same-day.