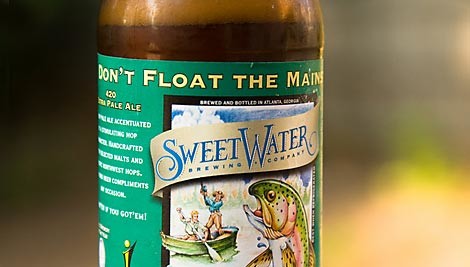 Image by Flickr user catharticfluxImage by 20080911sweetwater.jpg Don't float the mainstream, is the company's saying.

The Atlanta-based SweetWater beer has finally found its way to Charleston and is having a pub crawl to commemorate the occasion, and educate beer drinkers on a few spots to buy it.

The event (but not the beer) is free, and you can register at 3 p.m. the day of at Vickery's Downtown, or register online.

They also say that event-goers will get "a free commemorative SweetWater pint glass, smokin' beer specials at participating bars and cool schwag."

I've had it and can attest that it's quite tasty. But here's what the company had to say about their ales in an e-mailed press release:
The brewery offers tasty West coast styles of aggressively hopped ales with creative brands that include 420, Georgia Brown, Blue, IPA and Hummer (year round) as well as Festive Ale, Motor Boat, Road Trip and Happy Ending (seasonal). SweetWater's brews are unpasteurized and only served in select Southeastern cities to ensure the freshest beers available and to keep all of the tasty flavors intact.

Can't wait for the pub crawl? The beer should be available at a nearby beer-seller.