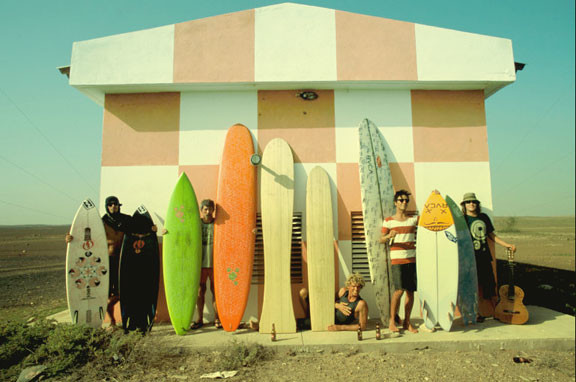 Image by Thomas CampbellImage by the-present-1.jpg The cast in West Africa.

Surf movie premieres date back to the late 50’s, but in the 80’s video entered the scene and filmmakers tended to abolish the screenings finding it more cost effective to release them straight to video.

Thomas Campbell wants to preserve the surf movie tour and has taken “The Present” across the country. “I am not re-inventing the wheel or anything, just doing what those filmmakers did back then,” explains Campbell, who extensively toured his second movie “Sprout” (2004) through 30 U.S. cities, and did a more modest run for his first The Seedling (1999.) “Doing a tour is a long-time tradition in our culture. It’s also the most sure fire way of bringing the film to the surf community directly, and people love it. … It's a really nice exchange.”

While getting seated for the two shows on Thursday night, viewers are treated to live music by California jazz duo “The Mattson 2.”  Campbell says, “The idea of the evening is for surfers to be able to get together with their friends and have a good time listening to some great music and seeing some beautiful surfing, ultimately I am just trying to translate the experience of surfing.”