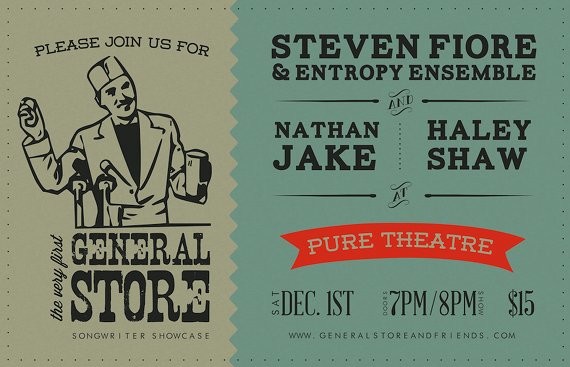 After the success of last month’s show at Charleston Music Hall, singer-songwriter Steven Fiore and Entropy Ensemble will be embarking on another musical project, this time at PURE Theatre, Saturday, December 1st.

The show will be based on Fiore’s future plans of opening a venue called the General Store, which intends to provide the audience with a warm, welcoming feeling, with musicians performing mostly unplugged, gathered around a single microphone giving an old-time radio show atmosphere, where audience members are more active listeners rather than just faces in a dark room.

Fiore has plans this collective to reach out to musicians worldwide: “Until the resources are available to make such a venue happen, we plan to host quarterly concerts where we invite artists from all over the globe to come, unplug their pedals and let their songs speak for themselves,” Fiore says. This environment also provides a bigger sense of hospitality for touring musicians themselves. Touring musicians can look forward to a good show, a comfortable night’s sleep and breakfast in the morning.

This show, however, will be fully comprised of local musicians—Nathan Jake of local band HEYROCCO will be opening the show, followed by singer-songwriter Haley Shaw, who honed her craft on Nashville stages for several years before recently returning to her Lowcountry hometown.