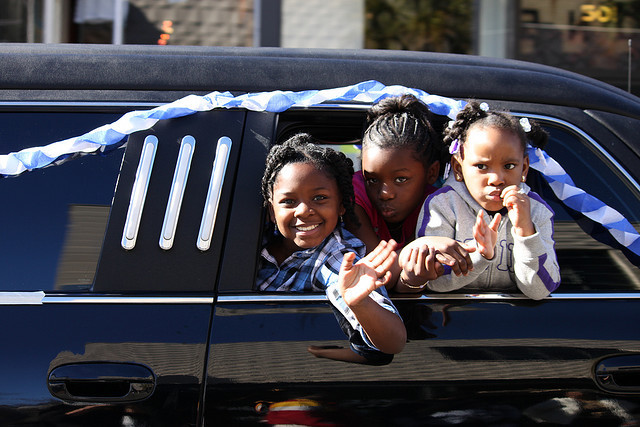 Image by Amanda Click/TheDigitel From the 2010 parade in Charleston.

Update January 18, post event coverage: While a couple of the events below have yet to happen, coverage is rolling in for the passed ones.

The Post and Courier has a write-up of the parade and other events, and a nice photo gallery.

Live 5 News has video of the parade and coverage of the MLK Day Challenge for College of Charleston students.

First reporting: Martin Luther King, Jr. day is being observed on Monday, January 17, and while many events abound, here are a few that caught my eye as standouts.

The annual downtown Charleston parade is at 11 a.m. from east Fishburn to north Ashley to east Sumter to south King to east Calhoun, with a Youth Speak Out after at 12:30 p.m. at the YWCA.

The Office of Institutional Diversity will present the MLK Candlelight Unity and Peace Rally in the Stern Center Garden at 4:30 p.m. It is an opportunity to reflect on Dr. King’s legacy through poetry and prose readings, songs, and a candlelight march. For more information, call (843) 953-5079.

The College of Charleston Center for Civic Engagment will host the 7th annual MLK Challenge on Monday, January 17. This all day event is an opportunity for students, faculty and staff to honor the legacy of Martin Luther King, Jr. by engaging in a day of service. Teams will go into the Charleston community and perform service projects – making it a day “on,” not a day “off.” Those interested in helping should email volunteer@cofc.edu.

The 11th Annual Dr. Martin Luther King, Jr. Business and Professional Breakfast will be held on Tuesday, January 18, at 7:30 am in the Exhibition Hall of the Gaillard Auditorium.

The Breakfast, an annual event sponsored by The YWCA of Greater Charleston, Inc. and the City of Charleston Inc., is a special opportunity for the business and professional leadership of Charleston to come together and honor the memory and teachings of Dr. King.

The featured speaker for this breakfast will be General Charles Bolden, Jr. (USMC, Ret.), Chief Administrator of the National Aeronautics and Space Administration.  Nominated by President Barack Obama and confirmed by the U.S. Senate, retired Marine Corps Maj. Gen. Charles Frank Bolden, Jr., began his duties as the twelfth Administrator for NASA on July 17, 2009.

Mayor Joseph P. Riley, Jr. said, “We are so honored to have General Bolden join us as a speaker for the MLK Breakfast. He embodies the drive, ambition, achievement and dedication that Dr. King spoke of and is a remarkable role model for every American.”

A resident of Houston, Bolden was born Aug. 19, 1946, in Columbia, S.C. He graduated from C. A. Johnson High School in 1964 and received an appointment to the U.S. Naval Academy.