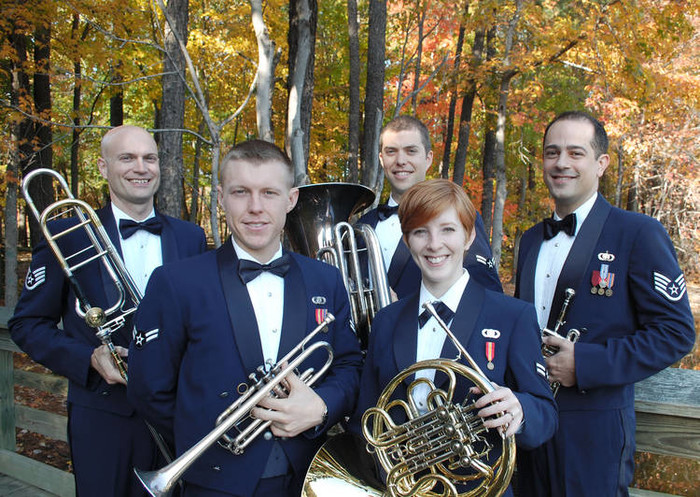 Update: The performance has been called off due to the sequestration.

The City of North Charleston Cultural Arts Department will host a free afternoon concert by the United States Air Force Heritage Brass at the Sterett Hall Auditorium on the former Charleston Naval Base on Sunday, March 17, at 3 p.m.

The concert will feature five Airman-musicians from Joint Base Langley-Eustis in Hampton, Virginia. From Bach to the Beatles and patriotic favorites, Heritage Brass offers a wide musical experience.

The Heritage Brass, formed in 1973, tours the Mid-Atlantic region from South Carolina to Delaware.

The musicians hold master’s degrees from several of the nation’s music schools, including Eastman, Indiana, and Carnegie Mellon, and bachelor’s degrees from Texas University at Austin, Lynn University, Roberts Wesleyan College, and California State University, East Bay. They’ve performed with the Pittsburgh, Midland-Odessa, New World, and Virginia Symphonies. The group has also performed the National Anthem and other patriotic music at Phillies and Orioles games and NASCAR’s Dover 400. Additionally, Heritage Brass performs in a variety of other venues including concert halls, theaters, schools, museums, and hospitals, and often presents clinics at the elementary, secondary and collegiate levels. Aside from their concert tours, Heritage Brass provides patriotic music and fanfares at important military ceremonies. Recently, the quintet participated in the opening of the Fisher House at Dover Air Force Base and the merger of Naval and Air Force Bases in Charleston, South Carolina, to form Joint Base Charleston.

For more information about this concert or other programs and services offered by the North Charleston Cultural Arts Department, call 740-5854, email culturalarts@northcharleston.org, or visit http://bit.ly/culturalarts.