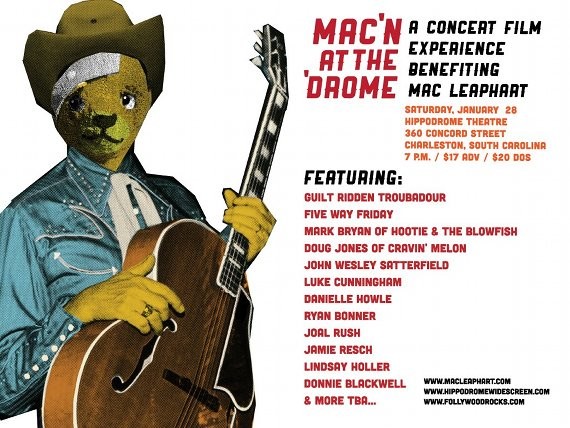 7:10 am on Tuesday January 17, 2012 | Posted by Amanda Click
Mac'n At The 'Drome: A concert film experience benefiting Mac Leaphart

On January 28th, both local and national musicians will be sitting in for beloved singer and songwriter, Mac Leaphart, and performing his songs at The Hippodrome.

Benefiting a man who has successfully made a career out of connecting with people through his music, proceeds will go to Mac in his ongoing recovery from a serious car accident and recent surgery to remove a brain tumor. A unique experience of camaraderie and good will, performances of Mac's music will be set against a visual narration on the theatre's IMAX screen and give life to Mac's story and his significant impact on those around him.

Doors open at 6:30 p.m. and acoustic music by Jim Marshall (Junkyard Angel) and a silent auction will start in the lobbies. Food concessions provided by Home Team BBQ and a full bar will run throughout the night. The concert begins at 8 p.m. in the theatre and will last until 10 p.m. followed by more live music by Five Way Friday and John Totaro's Classic Woodies until 12 a.m. or later. Garage parking is available as well as free parking in the open lot adjacent to the venue.