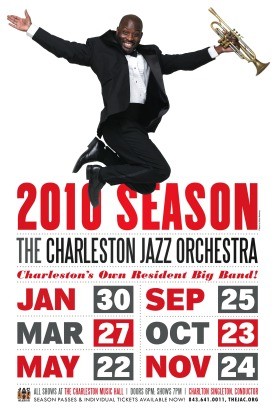 The Charleston Jazz Orchestra concludes its 2010 season with 'Holiday Swing,' on Wednesday, November 24th, at 7 p.m., in the Charleston Music Hall.

Conductor Charlton Singleton returns to the stage with Charleston’s finest musicians to present a program featuring Duke Ellington’s ‘Nutcracker Suite,’ as well as CJO’s Season Two favorites. The show will be performed as two sets with an intermission.

The Charleston Jazz Orchestra is a twenty-piece big band made up of many of the finest musicians in the Charleston area. They all have extensive resumes and have played in a great variety of groups in Charleston and around the world. Charleston Jazz Orchestra is enjoying its third year of performances, and has established itself as Charleston’s resident big band ensemble. The orchestra was debuted in March of 2008 and, under the musical direction of bandleader Charlton Singleton, has been electrifying audiences ever since. The CJO performs all forms of jazz, and its repertoire comprises blues, swing, Afro-Cuban, pop, progressive, Latin, jazz standards, ballads, and sacred.