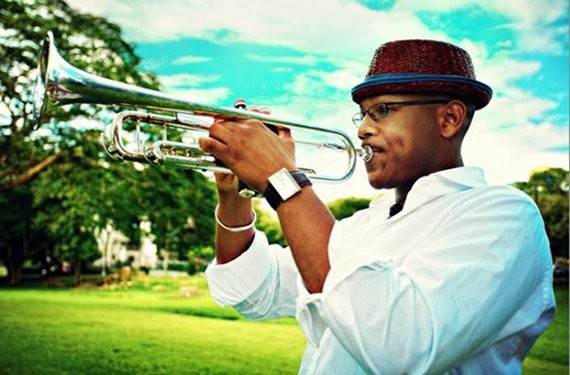 8:00 am on Monday November 8, 2010 | Posted by
Etienne Charles brings Afro-Caribbean roots with Folklore to Charleston

JAC welcomes Charles back to Charleston after his 2008 JAC Jazz Series debut as a featured guest for Holy City Homecomin’ with Gradual Lean during the Piccolo Spoleto Festival. Charles returns this time with his dynamic quintet, including Nick Rosen (piano), Stan Piper (bass), Chris Burroughs (drums) and Jacques Schwarz-Bart (tenor saxophone), bringing his latest project Folklore to the stage. Show begins at 9 p.m., doors open at 8 p.m. Beer and wine available for purchase.

In 2009 Etienne released Folklore, an enticing album of original music. The music employs jazz improvisation and harmony with folk rhythms and chants inspired by the African experience of Trinidad and Tobago. At album’s core is a suite of compositions based on characters of the Afro-Caribbean folkloric tradition: La Diablesse, Douens, Soucouyant, Mama D’lo, Mama Malade and Papa Bois. These mythical creatures have been a part of the Caribbean folk heritage for centuries as they were brought over by West African slaves and passed down from generation to generation through stories, chants and dances. The album explores these stories, interpreting images and tales and opening up a true rhythmic and harmonic dialogue between history, tradition and multiple music genres.

Etienne Charles comes fully prepared with a unique concept and a plethora of musical resources for this watershed effort. This landmark recording also features Guadeloupean saxophonist Jacques Schwarz-Bart, Milan Milanovic on piano, Luques Curtis on bass, drummer Obed Calvaire, percussionists D’Achee & Ray Charles as well as vocalists Keith ‘Designer’ Prescott, Wendell Manwarren and Roger Roberts. Etienne Charles stands at the vanguard of a new generation of musicians who are from the Caribbean but are not totally of it, introducing a fresh and broad-ranging artistic vision, working with a myriad of influences to color their soundscape.