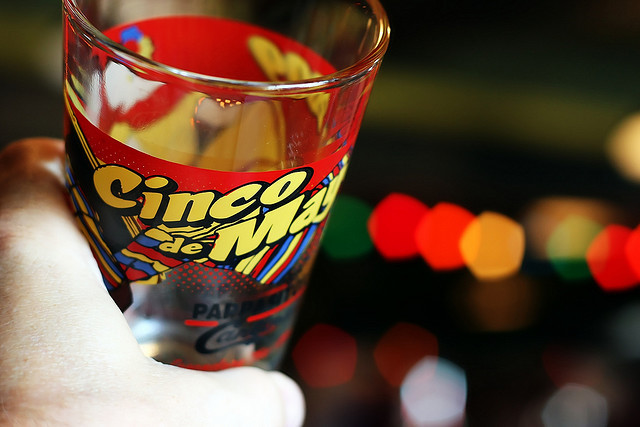 5:44 am on Tuesday May 3, 2011 | Posted by Ken Hawkins
Cinco de Mayo comes nigh in Charleston; Here's a roundup to help you navigate

Image by Flickr user Dave77459 Yes, it is time to break out the festive glassware.

The Mexican commemoration of the Battle of Puebla ﻿(that's Cinco de Mayo) is nearly here, and the wave of events is crashing down, so we're firing up this post that we'll update with events as we spot them.

This year's tequila-happy events fall on a Thursday.

Have one to add? Drop us a line in the comments or the usual social media spots.

Taco Boy will be hosting ﻿at both its Downtown and Folly Beach locations ﻿starting at 4 p.m. with sombreros, live music, and the taco truck. Only those 21 and up will be allowed in. $10 and a raffle prize of $500.

The Charleston Cinco de Mayo Festival ﻿returns to the Visitor Center Bus Terminal from ﻿7 to 11 p.m. $10 in advance, $15 at the door. Live music, dancing, food, and lots of culture. They'll also be doing "The Jose Cuervo Mini Olympics," which is basically tequila-drinking games with assorted giveaways.

The Tattooed Moose is hosting the return of their no-cover "When in Rome Cinco de Mayo Party﻿" with "cheap margaritas, good tequila, and cold beer." No time specified, but our money's on showing after 7, or perhaps after you try one of the first listed events.

Get on the water with the Charitable Society of Charleston's Cinco de Mayo Harbor Cruise starting at 7:30, with the boat leaving at 8 and returning to Patriots Point at 11. It's $25 and includes all you can eat (taco bar, rice and beans) and alcohol (beer and wine) as well as live music by DJ C Nile. This year it benefits East Cooper Meals on Wheels. 21 and up only.