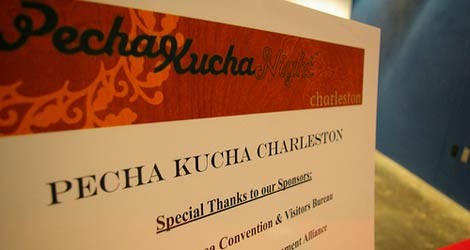 Update February 20: If you were hoping to go but didn't get a ticket, you'll be glad to know Fish is hosting a simulcast.

Update February 18: Tickets are up for sale and are $5 each. Buy them here.

Also, the line-up has been announced:

Head over to their site for details.

The location or exact time has not yet been announced.

Charleston Pecha Kucha Night is set for its second night on Wednesday, February 25.

No location, time, or instructions on how to reserve a spot has yet been announced.

If you didn't make it to the last one, you really missed out on a great time. So don't make the same mistake twice.

And, it sounds like they already have a lineup of speakers ready. But, if you want in, it doesn't hurt to submit your name.

Don't know what the heck Pecha Kucha is? Here's the rundown: Pronounced “peh-cha ku-cha,” the word is Japanese for the sound of conversation, the event is essentially a series of clever presentations by clever folks. They generally focus on design, art, photography, culture, and the like. But, to keep things concise and hoping, each presenter only gets to present 20 slides for 20 seconds each.

You can learn loads more over at Wikipedia.

Sound interesting? Well, it is.