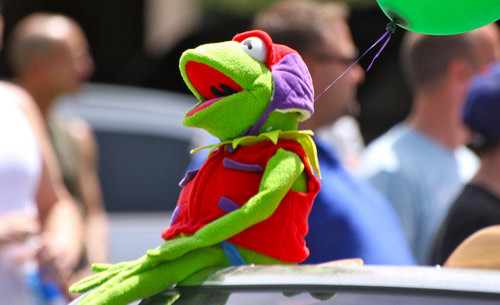 7:37 am on Wednesday May 12, 2010 | Posted by Ken Hawkins
A 'Gay Pride Parade' comes to North Charleston - with an after party at the Citadel (updated)

Update May 16: The post-event coverage is in; take a gander here.

Update May 12: As expected, the City Paper has released their lengthy cover piece with more depth; read it here.

We can still expect yet more coverage from Scene, we'll give you a shout if it adds more.

On Saturday, May 15, the Charleston area will be host to its first gay pride parade.

So far this doesn't seem slated to be one of your stereotypically zanier parades, but rather focuses on a message of "bridging the gap" and equal rights -- though there will be floats and a lengthy parade route from Park Circle, through the Olde Village, and onto the old Navy Yard (see map below) well a rally will be held on Riverfront Park. Parade starts at 11 a.m. and the Riverfront festival goes from noon to 5.

There will also be an after party at the Citadel dubbed "Fabulas" from 9 p.m. until midnight ($10).

You can get the full event schedule and details on the event's Web site.

Oh, and we hear this is to be the City Paper's cover story tomorrow, and Scene's on Thursday, so expect links with gory details.