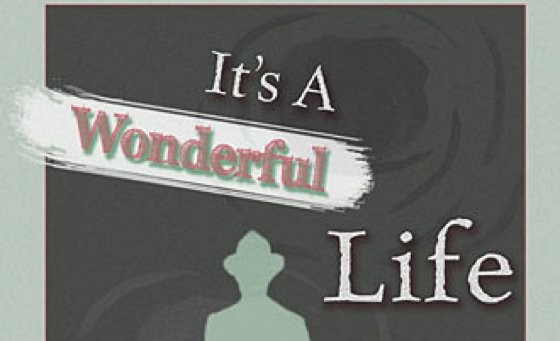 The play, directed by Mark Landis, will open Friday, November 27th at Upper Lance Hall on the grounds of Circular Congregational Church, and run through Saturday, December 19th. Here's what the press release had to say about the upcoming production:

It's Christmas Eve, 1946 and the audience attending this production at PURE Theatre will be taken back to a New York radio station. There, a cast of five actors will be performing the story of It's A Wonderful Life that families all over have watched many times in the beloved film version starring Jimmy Stewart. The audience will be treated to a glimpse of what live radio drama once looked like. The five actors in the cast will be playing all the roles from the central figure of George Bailey, Clarence the angel who shows George how much his life has meant to the people around him, the evil Henry Potter, Bert the Cop, Ernie the cab driver, George's wife Mary and his whole family...even little Zuzu. We will see them play all the characters, and even add the live sound effects, just like a cast of actors might have done it years ago while American families gathered around their radios to listen in. "The fascinating thing is that this story touches something so important in all of us, that even though we are playing it with this very amusing convention of five actors playing all of the characters and doing all the sound effects, it still remains a deeply heartwarming story," says Director Mark Landis. "I've always loved radio. The era of radio drama was long over by the time I was a child but my parents and grandparents always reminisced about listening to their favorite programs. I remember my grandfather even preferred listening to the radio to watching television,” continues Mark Landis. “The playwright, Joe Landry, has given us the opportunity here to play one of everyone's favorite Holiday stories and to do something that I would have thought was impossible - to see It's A Wonderful Life in a fresh way."