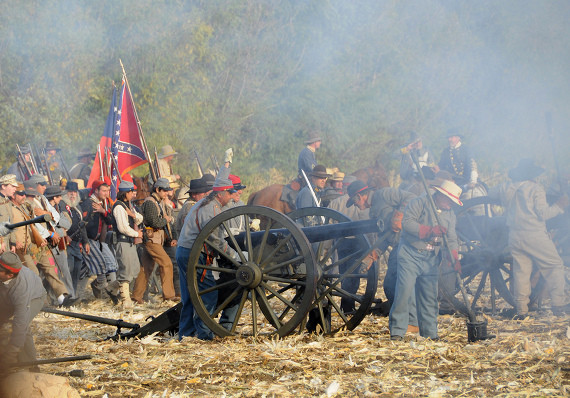 7:23 am on Friday June 15, 2012 | Posted by Amanda Click
Ceremonies mark the sesquicentennial of the 1862 Battle of Secessionville

The sesquicentennial of the Battle of Secessionville on James Island will be commemorated on June 15-16.

Historians consider Fort Lamar and the Battle of Secessionville the second-most-important Civil War battleground in the state after Fort Sumter, where the war began. Heritage Trust, a part of the DNR's Habitat Protection Section, acquired the 13.5-acre Fort Lamar Heritage Preserve in 1996. The fort is south of Charleston on James Island. The preserve includes ramparts from Fort Lamar, a battery that helped repel Union troops during the Battle of Secessionville on June 16, 1862. A Union force of 3,500 men attacked the fort, but was turned back three times by 1,250 Confederate soldiers. The DNR owns and protects many Civil War era features including three Confederate earthworks in Georgetown County, Fort Johnson in Charleston County, Fort Drayton in St. Helena Sound and the Stoney Creek Battery in Beaufort County.

Join historian Doug Bostick for an interesting program on Friday, June 15 at 7 p.m. at the DNR auditorium at Fort Johnson as he traces the events leading to the decisive Battle of Secessionville.

On Saturday, June 16th, head to Fort Lamar on James Island from 10 a.m. to 4 p.m. for a full day of events commemorating the 150th anniversary of the battle. The opening assembly will feature an address by Pat Brennan, author of the highly acclaimed book "Secessionville: Assault on Charleston." After the opening ceremonies, Pat Brennan will be available to sign copies of his book for interested attendees.

Activities include Confederate reenactors, lady reenactors, and rifle and cannon drills and firings. Tours will be offered throughout the day of the historic site offering insights on the battle and the Confederate defenses at the Tower Battery. A food vendor will be on site for the convenience of all visitors.

Parking is available at Secessionville, but visitors wanting to attend the opening ceremonies at 10 a.m. are encouraged to come early to catch the shuttle to Fort Lamar. For further information contact chairman John Jowers at (843)509-9868 or the SC Battleground Trust at (843)743-8281 or info@scbattlegroundtrust.org.