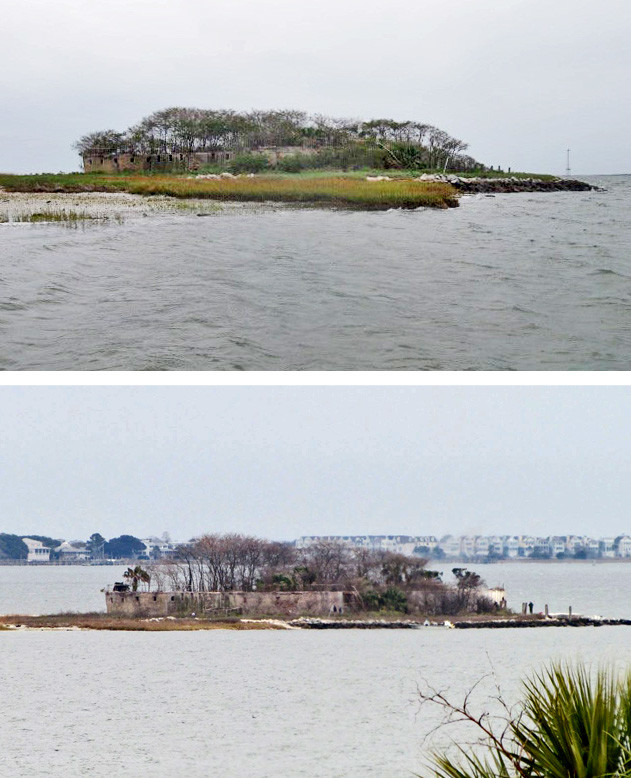 9:20 am on Saturday February 12, 2011 | Posted by Ken Hawkins
There'll be a fire in the Charleston Harbor: Vegetation to be burned from Castle Pinckney (update: before and after)

Update February 12: Well the fire is over and the old fort has been revealed a bit more.

Up top are before and after shots from the Historic Charleston Foundation. The Post and Courier has a more dramatic image of the burn's flames.

First reporting: When you're along the Charleston Waterfront Park or at the Battery, you know that island to the left of Fort Sumter? Yeah, the one that looks like a big foresty mound?

The Historic Charleston Foundation has been increasingly concerned about the condition as over the decades, the unique circular brick fort has deteriorated severely from the vegetation has grown up around it. And so the group has teamed up to have the vegetation trimmed back and now it will be burned on Friday, February 11, starting at 9 a.m. with the best visual will likely occur at noon.

Below is more information from the Foundation about the burn and the fort's history:

The on-site, controlled burn will be managed by DNR’s certified specialists to benefit wildlife, including the many pelicans that favor the site. Graduate students from the joint Historic Preservation Program at Clemson University and the College of Charleston, will join professionals from HABS in measuring and drawing historic Castle Pinckney after the vegetation clearing.

Castle Pinckney played a role during the nullification crisis of the 1830s and was garrisoned by South Carolina militia until its conversion into a temporary prison to house Union prisoners from the Battle of First Manassas. Its casemates were bricked up to form cells and most of its artillery transferred to positions on Morris Island. These prisoners remained at Castle Pinckney until they were exchanged in October 1861. After their removal, Castle Pinckney was one of the key Confederate defenses in Charleston Harbor until the end of the war.

In 1933, President Roosevelt transferred the property to the National Park Service under the Secretary of the Interior. The property was transferred to the S.C. States Port Authority, its current owner, in the 1950s.