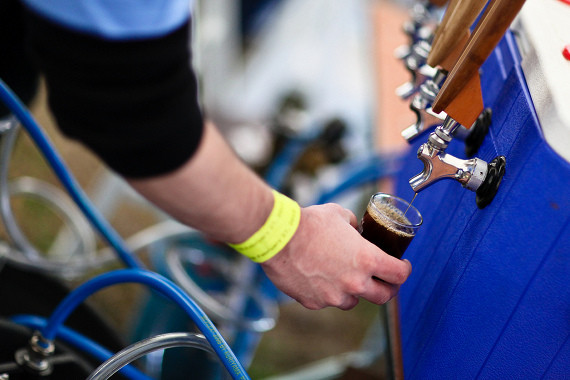 4:38 am on Monday September 27, 2010 | Posted by Amanda Click
Head to The Joe for 8th Annual Ballpark Festival of Beers (here's our take, and then some, on the event's top brews)

The Charleston City Paper's resident beer enthusiast, T. Ballard Lesemann, has come back with his review of the 8th Annual Ballpark Festival of Beers, summing up the evening with the tag line, "Great suds and fun crowds."

The event was great way for both experienced and newbie beer drinkers to try an impressive array of both old standards and new high-gravity craft brews. I found some new favorites, including Unibroue's Maudite, a strong amber-red ale produced by the Chambly, Quebec brewery as well as the Duck-Rabbit Milk Stout, a traditional full-bodied stout brewed with lactose.

Other notable beers from the evening, in my opinion, were RJ Rocker's Buckwheat After Dark Ale, a chocolatey dunkelweizen and New Belgium's Hoptober Golden Ale.

Take a look at Lesemann's post in the Charleston City Paper to learn about his favorite brews of the evening as well as take a look at some photos he snapped during the event.

Downtown Charleston's largest beer festival, the annual Ballpark Festival of Beers, is coming back to The Joe on September 25th.

The 8th Annual Ballpark Festival of Beers will feature more than 100 different varieties of beer situated in tents lining the RiverDogs' outfield.

From 7 to 10 p.m., guests pack the green to sample beers from around the country in a 5-ounce sampling glass. If you've never been to this event before, my suggestion is to get there early. Lines tend to get pretty long come 8 p.m., so hit the craft beer tents early.

Keep in mind that the Ballpark Festival of Beers is a 21-and-over event -- no pets, kids, babies in strollers or anyone under the age of 21 will allowed into the facility.