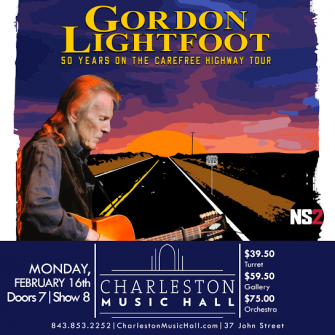 4:43 pm on Monday January 19, 2015 | Posted by ChasMusicHall
An Evening with Gordon Lightfoot

In June of 2012 Lightfoot’s legacy was further enhanced when he was inducted into the Songwriters Hall Of Fame. Lightfoot was honored for his role in defining the folk-pop sound of the 1960s and ’70s. There are fewer than 400 inductees who make up the impressive roster enshrined in the Songwriters Hall of Fame including: Burt Bacharach, John Fogerty, Bob Dylan, Carole King, Paul Simon, Billy Joel, Elton John, Brian Wilson, James Taylor, James Brown, Bruce Springsteen, Jim Croce, Phil Collins, Loretta Lynn, Van Morrison, Kris Kristofferson, Dolly Parton, Diane Warren, Garth Brooks, and Leonard Cohen. In his native Canada, Lightfoot has been decorated with the highest honors bestowed to a civilian including the Governor’s General Award and the Companion to the Order of Canada honor of merit. He has also won 17 Juno Awards – Canada’s equivalent to the Grammy Awards. Gordon is a member of Canada’s Walk of Fame and The Canadian Songwriters Hall of Fame. In 2007, Canada. Post honored him by issuing an official Gordon Lightfoot postage stamp. Lightfoot is also in the Canadian Music Hall of Fame and the Canadian Country Music Hall of Fame. Gordon Lightfoot is an indelible part of the Canadian national spirit and regarded as perhaps the most prolific and greatest Canadian singer-songwriter of all time.

“Lightfoot became a mentor for a long time. I think he probably still is to this day. I can’t think of any Gordon Lightfoot song I don’t like. Every time I hear a song of his, I wish it would last forever. ” – Bob Dylan

“Gordon Lightfoot has created some of the most beautiful and lasting music of our time. He is Bob Dylan’s favorite singer/songwriter – high praise from the best of us, applauded by the rest of us.” – Kris Kristofferson