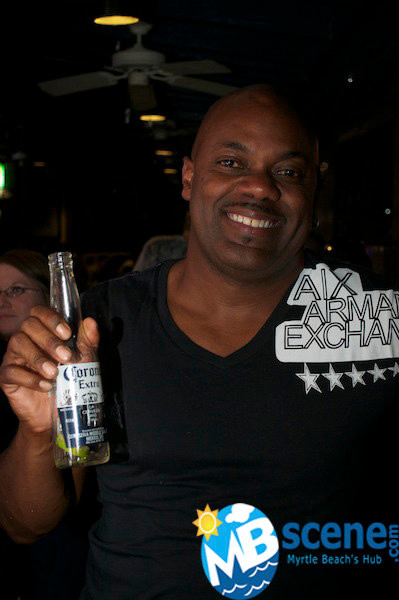 *Originally published on August 6, 2010 on MBScene*

On July 6, 2004, local mortician Marvin Latimer burst on to television screens all across the country as one of the contestants on the hit CBS reality TV show, Big Brother in its, some say thanks to Marvin, fifth and best season ever.

Week after week, Marvin Latimer became more and more popular as one of the most loved “characters” on Big Brother 5.  It was his personality that made America dig this guy but his love of cooking is what made his cast-mates keep him around for 65 days, “When I got on Big Brother, I told them my main strategy would be the cook for the house,” Marvin shares, “When I saw the show, I noticed, these [contestants] were always starving and waiting for food competitions. I knew they had nominations on Saturday, so on Friday I would tell everybody in the house what I was planning on making for dinner the next day.” And with that, Marvin Latimer became the “food guy”, or as he put it to me, the, “food nerd”.

Marvin’s love of food was all thanks to his mother. Growing up Marvin’s mother made sure to instill in her boys basic life skills, “When I was a kid, there was a guy who lived down the street from us, who would starve if his wife didn't cook him dinner, and my Mom didn't want us to be like that, so she taught us to wash cloths and do dishes and cook.” Like any good southern black woman, Marvin’s mother taught him all the traditional southern fare - rice, collard greens, “and all the stuff with fatback! All the good stuff that’ll raise your cholesterol to 310 like mine...thanks Mom, appreciate that!”

After learning the goods from Mom, Marvin ventured out into the culinary world and has fallen in love with all types of cooking styles and techniques, especially French cuisine.  Starting his own little dinner parties back when he was a single man, Marvin would invite some local beauties from the gym to come and have dinner. And soon two invitations became a five person dinner party, then a ten person party and so on. Marvin honed his skills by studying famous chef’s cookbooks, but he likes to experiment and  add his own flair to classic recipes.

After Big Brother, Marvin rode the fame with a guest spot on a soap opera and some work with Fox Sports, and cooking on a  competition segment on the Rachel Ray show. Marvin’s passion with food sparked the interests of Hollywood executives and, as they  do, talked a big game to Marvin, “I was a green as they come, just fell off the cabbage truck, and one of the producers came up to me,  I had just gotten off of Big  Brother, and she said, ‘Marvin, you cooked every night on Big Brother, they’re chatting about it on the  internet, they love it! We’re thinking  about developing a cooking show around you.’” Marvin continues, “I was, like, great! So I came  back to Myrtle Beach and thought, “I’ll produce it.” I went crazy and hired a production company. We shot the pilot for the show, and when done, they wouldn't even take my phone calls!  ‘Marvin who!? You believed that?’. Scorned a bit by Hollywood lip service he decided to go it alone.  Marvin Latimer decided to make a go at his  own cooking show - written, produced and staring himself right here on the Grand Strand - The Marvin Show!

The Marvin Show is as homemade as any show can get. Airing on local ABC station, WPDE, on Sunday early, early mornings at 1 a.m. (or just late, late Saturday night, depending on how you look at it), the show is best described as a house party with food and (maybe) too much drinking that they happened to film. The most unique thing about the show is Marvin has made the decision to keep in all the bloopers, dropping a hot pan, knocking over the ingredients, not being able to find his knife, it’s all there. The Marvin Show is highly entertaining and the food is defiantly the focal point. “Being a local show, we get a little more love from people finding out it was made in Horry County people are more prone to want to watch,” Marvin says, “the biggest news is that when the May sweeps came out, we made the book! A  guy from ABC called and said, ‘this is amazing! We've had shows on for 10 years that never made the [Nielsen] rating.’” All in all  that is quite an amazing feat for a small, local show that is produced on a shoestring budget.  With the boost of confidence from making the ratings, Marvin has set his sights on getting the best shows together, making better shows, and trying for syndication around the Carolinas.

Marvin expresses his thoughts on his show like this, “I try to keep it as real as possible and make sure I entertain for those 25 minutes [...] we’re cooking and having a good time. It’s supposed to be a late night house party feel and you might just learn something.”  With that little bit of heartfelt expression of what The Marvin Show is about, I decided to end the interview because I  couldn't have wrapped it up any better. Always being an entertainer and wanting to entertain, Marvin Latimer couldn't have been a better interview subject. We at MBscene.com couldn't wish Marvin enough luck, but we know he’s going to do just fine with or without the help from Hollywood. Thanks for your time, Marvin!

Check out The Marvin Show on ABC, Sunday Mornings at 1 a.m.

Also, become a Fan of The Marvin Show on Facebook: HERE!

I love him,he's the best at what he does

I would love to meet him

Can I give him my number?