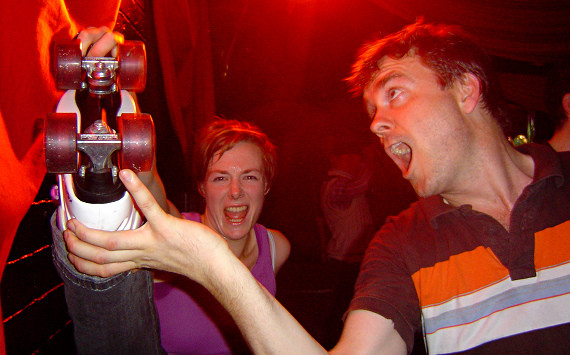 Update August 29: Just seeing The Charleston City Paper's weekend roundup, which has got tips to even more weekend fun. Take a look.

This weekend has a plethora of awesome events to attend, so start planning early so you can fit in as much as possible. Here is a run down of all the noteworthy happenings.

If the rain holds off, there are two sporting events this evening. The RiverDogs continue their six-game homestand and the Charleston Battery take on first place Portland Timbers out at Blackbaud Stadium. There is a cool art exhibit, if you will, taking place at 52.5 Records tonight as well. There will be a bunch of limited edition gig posters priced pretty cheap, so swing by the store at 7 p.m. to buy or browse. The Custom Home + Remodel show begins its second day today, and the focus is on hurricane preparedness. Tis the season, and they'll be giving away 500 free hurricane kits to those in attendance. Over on Isle of Palms, Sam Bush, the "king of newgrass" will be performing at The Windjammer. If you're into late-night exercise and adventures, tonight will be the final midnight mystery bike ride of the summer.

Tropical storm Danny will be pushing some great waves into the area's beaches, so surfers, take heed. If you're an early riser and big fisher, head out the Folly for the 'Big Kahuna Fishing Tournament' that is taking place on the Folly fishing pier. The RiverDogs will be continuing their homestand, and the Lowcountry High Roller derby girls will be taking names at their '2 Cruel for Skool' bout. Eye Level Art is hosting a CD release party featuring the local act collaboration project, The Green and Bold. Another concert you may want to check out is being held at the new Mount Pleasant Pier. The 'Concert on the Cooper' will feature food, dancing, and music from the band Spunjwurthi. Cinebarre is continuing their midnight movie series with a free showing of the movie Old School. The movie will be held outdoors, so it'll be weather permitting.

Sunday will be the chance to make your mark in the world and take part in a super egg toss challenge at the RiverDogs stadium. They're trying to make it into the Guiness Book of World Records, pretty exciting stuff. A baseball game will follow the egg toss. Guerilla Cuisine is hosting one of their underground dinner parties that will pay homage to sous chefs in the Charleston area. In the evening, you can head to to The Windjammer for the special CD release party from Charleston's new recording studio, Charleston Sound. The cherry on the Sunday sundae is definitely the Michael Jackson memorial roller disco party at Hot Wheels. What better way to end your weekend?

Don't forget you can get connected with even more good stuff on the events page.

Entertainment
weekend round up
Advertisement