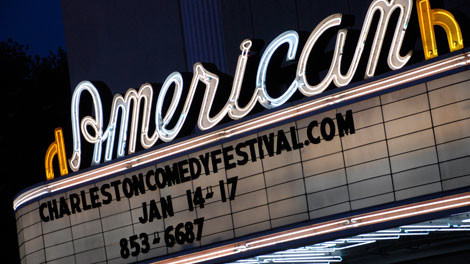 Image by ccf3.jpg Charleston Comedy Festival is in town.

The Charleston Comedy Festival came to an end on Satursday after four lengthy days of comedy fun in town.

Check out the pictures that we took of the festival at our complete Flickr photo collection.

The Festival Finale romped for an incredible two hours at Theatre 99 late on Saturday night and early Sunday morning. Several of the acts that had played that and previous nights came in to perform an act or scene from their show.

It all ended with a mega-improv jam, with the New York and Chicago improvisors joining our own local HaveNots! on stage for a memorable finale.

We'll also remember hypnotizer Peter Gross at the American getting a bunch of kids to hold up their shoes to their ears as if they were cell phones. The Pushers quite literally pusing the boundaries of taste and deceny with their outrageous sketch comedy, and the totally unforgettable FUCT group on stage at '99 showing more flesh in one on than we've ever seen before.

The shows from out of town rolled into Charleston today as things really hotted up for the festival. We managed to make it round to nine different shows that were on this evening, and will be doing the same Saturday as well!

Our favorite of the night was FUCT (That's the Fordham University College Theatre) group, who performed at Theatre 99. There was a lot of flesh in display...

The Charleston City Paper chats about a lot of the shows, and offers write-ups of: Sid Vicous!, Horse & House, and Rockola; Improv Marathon, J. Reid and Kenny Z; and I Eat Pandas.

Update Jan 17, 11:30 p.m. The City Paper also hosts videos of God’s Pottery, KennyZ, and J. Reid; and a second set of photos and videos of Hot Sauce and The Pushers.

The City Paper also gave a big thumbs-up for the surreal Roseville.

The shows aren't just on at Theatre 99, as on Thursday the Charleston Ballet Theatre (opposite 'Basil' on King St.) hosted This is Chucktown and Doppelganger, whilst back at Theatre 99, local groups 3 Play, Full Love Throttle. and Big Dicktionary strutted their stuff -- check out our video for our favorite moments.

The Charleston City Paper has more video clips from The Cut Company of 3 Play, Full Love Throttle, and Big Dicktionary.

The City Paper also has some more pics from Theatre 99 on Thursday night.

But the out-of-town acts started to arrive in Chucktown last night, and now the festival REALLY kicks off over the next two nights.

The Charleston City Paper is hosting videos from the Banana Monologues and two from Neckprov. Go see 'em. Also check out their write-up of the night.

Stand Up Competition at the Music Farm

Whilst over at the Music Farm, the stand up competition proved hugely popular, although some people were disappointed as new fire regulations restricted the number of people that could be let in, and it quickly sold out.

Fifteen comics got 5 minutes each to impress the crowd, 14 guys and 1 girl, at the end of which local fire fighter Tyler Howze, and Theatre 99 regular Tim Höeckel tied the winning spot.

Want to catch one of these? There might be another show.