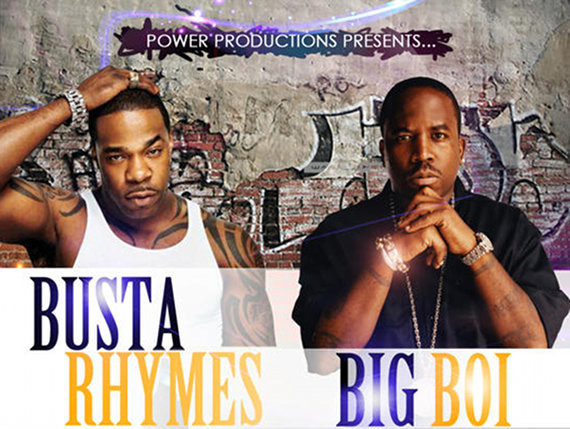 Hip hop lovers of the Lowcountry unite! At 7:30 p.m. on Sunday, July 17th, two legends are coming to the Gaillard Auditorium (77 Calhoun St.) for a killer show: Busta Rhymes and Outkast's Big Boi.

Busta Rhymes, best known for his unique technique of fast rapping, has been on the music scene for over a decade. He has sold albums that have been certified platinum and gold, had a number one album on The Billboard Top 200, and has eight Grammy nominations. ﻿

Big Boi’s first solo album Speakerboxxx, packaged with The Love Below (André 3000’s solo project) was released as solo projects under OutKast’s name in 2003. “The Way You Move” was Big Boi’s first hit single, which peaked to number one on U.S. Billboard Hot 100. ﻿On July 5, 2010, Big Boi released his first solo album (not under OutKast’s name) Sir Lucious Left Foot: The Son of Chico Dusty. Some of the singles on this album included: “Shutterbugg” featuring Cutty and “Follow Us” featuring Vonnegutt. ﻿

Tickets, which will be available June 17th, will be priced as follows: