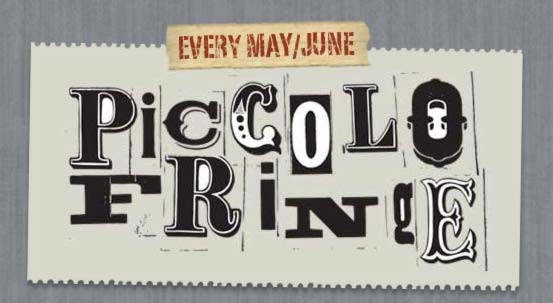 We've just received this year's list of shows and are still digesting, but a quick look notes the return of some favorite out-of-town acts like the "Upright Citizens Brigade Touring Company," "One Man Star Wars Trilogy," and "FrankenMatt," among others.

Oh, and a very happy 10th anniversary to the Fringe festival.

Theatre 99 is proud to present the 10th Annual Piccolo Fringe Series as a part of the Piccolo Spoleto Arts Festival.  This year, 21 different shows from around the country and Charleston will be participating in 72 performances in 2 different venues!

Piccolo Fringe is celebrating it’s 10th year with 16 days packed with the some of the country’s most talented artists.  Tickets for the first Piccolo Fringe in 2001 were $15 each and 10 years later, lo and behold they are still $15 each.

From the late Spalding Gray to Tiny Ninja Theater’s Macbeth, from 30 Rock’s Jack McBrayer to SNL’s Horatio Sanz, Theatre 99 has brought to Charleston world-class, cutting edge shows that capture the imagination.  The brilliance of The Cody Rivers Show and the comedic gems that are Rode Hard and Put Away Wet and Harvard Sailing Team are the types of shows that Piccolo Fringe has worked hard to present for 10 years.

This year’s line-up (see next page) includes past favorites and never before seen gems.

No scripts!  All improv!  Celebrating their 15th birthday!  This high-energy show is entirely based on your audience suggestion so every show is different.  Two lucky audience members will actually become part of the show.  This year The Have Nots! will perform their unique brand improv comedy AND will invite special guests to perform.  You never know who will join them on the stage!  Come find out why critics say “The Have Nots! have it!”

FrankenMatt is ecstatic to be back at Piccolo Fringe for the third year in a row.  They are a two-man comedy team from Los Angeles starring Second City Chicago alums Frank Caeti (MADtv, Reno 911) and Matt Craig (According to Jim, The Office). Two years ago, FnM performed their improvised show Pilgrimage, last year they performed their sketch comedy show, and both received rave reviews.  What are they doing this year? You'll have to come find out, but one thing is for sure, it will be funny. Critics have called FrankenMatt, "nothing short of amazing", "A+", "genius improvisers", and "future rock stars of comedy."

The Reckoning is the longest-running, most infamous improv group in Chicago. "These players always stand out when they appear in other ensembles, and together, as masters of iO's signature form, the Harold, they're remarkably consistent at giving audiences something to laugh at and students something to study." –Chicago Reader

CatNip is an all-lady improv ensemble based out of Los Angeles, CA.  Fresh off the run of their original musical, "CatNip!  The Musical," this high-intensity, character-driven long-form improv show can be both clever and ridiculous all at the same time.  Some of CatNip's credits include; The Second City Mainstage, ETC, and Touring Company, The Groundling's Sunday Company, Baby Wants Candy, iO, UCB, Aspen Comedy Festival, Curb Your Enthusiasm, According to Jim, The Bobby Lee Project, In the Motherhood, Sports Action Team, Infomania, SuperNews!, and those Sonic commercials.  CatNip! was recently referred to as "cougars" at the Chicago Improv Festival.  CatNip! thinks they are too young to be cougars...check them out at www.catnipthemovie.com!  We can't wait to improvise all over you!

Big White Angels is a comedy extravaganza performed by Michael Patrick O'Brien (Saturday Night Live writer) and Lyndsay Nicole Hailey (ImprovOlympic).   The show consists of sketches, solo performance, and improvisation from these veterans of the Chicago comedy scene.  After 10 years of teaching and performing improv and sketch at every possible theater and bar in Chicago, O'Brien moved to New York last September to write for Saturday Night Live.  He is thrilled to be returning to Piccolo Fringe where he has been luc ky to perform in the past with The Reckoning and even once with local heroes, The Have Nots.  She is thrilled to be in Charleston because she grew up a stone's throw away.  If you can throw a stone all the way to Richmond, that is.

Two shows for the price of one!

Sitting at the Grown Up Table

Holly & Eric are newly wed, but not to each other.  This irreverent and irresistible look at the ups and downs of the first year of marriage is the true(st) story of two friends who fell in love... with other people.

Written and performed by Holly Laurent & Eric Hunicutt.  They are both members of The Reckoning, Chicago’s longest running long form group.

Touched – a sort of solo show

A show by Jet Eveleth (The Reckoning, I Live Next Door to Horses) that explores some of her favorite and most heart-breaking characters.  With background in improv, dance and clowning, Jet creates silent scenes, absurd physical theater and a true sense of vulnerability in each character.  The Chicago Reader calls Eveleth “…desperate, vulnerable, and hilarious to observe. You really have to hang on to every word--but that's easy to do with Eveleth, whose shape-shifting face is rich with emotion and humor.”

Two shows for the price of one!

Molly Prather's comedic monologue offers "a glimpse into Prather’s mind-set as she looks back at various suitors from her romantic history. Take a seat and let the warm feelings of a comedy crush overwhelm you as she spins her expertly timed and deeply humiliating tales of lovelorn European travels and explanations of why she dejectedly shuffled around New York City wearing a chicken costume." -LA Times Brand X.  Molly describes her show as: A collection of unfortunately true stories that will make you feel better about all your crazy exes.  "Best Thing To Do in LA" -LA WEEKLY

This one-man show type thing by world-class entertainer, Dave Hill is a true story of hope, beauty, and one man’s undying will to rock the hell out of people.  That one man is Dave Hill (mentioned earlier) and over the course of his allotted time slot, Dave will finally speak publicly about what it’s like to be a gigantic celebrity in Japan, a country where he is pretty much like Princess Diana or something. If you don’t like shows that feature tales of addiction, lots of full-on guitar shredding, a return to innocence, and also lots of hardcore banging, you should probably not come to this show. If you do like all that stuff though, you will no doubt enjoy this show on at least four different levels.

The Complete History of Charleston for Morons (60 min)  $15

Over 300 years of Lowcountry history in 60 minutes!  A comedy history lesson accessible enough for morons to enjoy -- forever answering the hard to ask questions like: can you still perform in black face?  What took Mel Gibson so long to join the Continental Army?  The Charleston City Paper says the Morons “dazzle the audience with their ignorance.”

Charleston's original all-female improv comedy group!  Part talk show format (similar to The View), part long form improv, ALL funny!  Bitingly witty, unpredictable, and politically incorrect the ladies of “Posse Talk” break all the rules.  “An unforgettable night of laughing ’til your face hurts.”  Charleston City Paper  If you are easily offended or feel that a woman's place is in the kitchen, stay home.

“Absolutely mesmerizing. From moment one…no one could tear their eyes away,” says Time Out Chicago.  "The Cody Rivers Show is completely unhinged...You have never seen anything like it." The Edmonton Sun. Pushing the envelopes of dance, music, physical theatre, and intellectually nonderivative high concept comedy with their latest new work, The Cody Rivers Show delivers unique shows unlike any other comedy act, past or present. “Nothing short of genius,” The Georgia Strait(Vancouver).  Back by popular demand!

This veteran foursome has been dominating the Chicago improv scene with a brand of bold, high-energy improv that is guaranteed to blow you away. Varying speeds like an elite-racing car this finely tuned machine seems to raise the bar just about every time they take the stage.

"Some of the flat-out funniest moments we've ever seen in an improv show come from this fantastic four. Uncanny onstage chemistry and a roster of sharp improvisers well versed in balancing grounded scenework and uncensored play…" - TimeOut Chicago

A comic monologue about searching for an epiphany... any epiphany at all.  After more than a decade of temping, both at work and in relationships, a man embarks on a solo trip deep into Africa. Trekking from the Atlantic to the Saraha. There he demands some proof that though we’re temporary, we’re more than mere temps. A comic, true story.

What do you get when you put three of Charleston’s funniest improv groups on one bill?  Absolute mayhem and hilarity!  This offers the biggest bang for your buck.  Each night features three of the following groups:  Neckprov, Moral Fixation, Hot Pants, Cats Hugging Cats, Shattering Pearls and Full Love Throttle.

A one-hour, high energy, nonstop blast through the first three Star Wars films. The catch is, there's only one cast member. Charles Ross, the writer and solo performer, spent too much of his childhood in a galaxy far, far away- adulthood has been similar. Ross plays all the characters, recreates the effects, sings the music, flies the ships, and fights both sides of the battles.  The hit of the 2004, 2006 and 2009 Piccolo Spoleto festivals!  3 movies, 1 man, 1 hour!

Don’t miss this amazing-but-true story of how Patrick Combs deposited a $95,093.35 junk-mail check marked ‘non-negotiable’ - hoping to spread a little banking cheer to tellers – and how it erupted into a staggering and funny David vs. Goliath-like adventure. Broadway World said it’s, “One of the funniest, most fascinating and fastest moving solo plays to hit New York in many a season. Nonstop laughter, it's also an edge of your seat adventure loaded with unbelievable real-life surprises."

The hilarious story about the one man in the world looking for love, falls for the woman in the world who just wants sex. The former one-man show, is now TWICE AS GOOD! The show returns from New York City and will be performed by John Brennan, Charleston's Best Local Comic/Actor 2007, and the talented 'Mary Kay Has a Posse' improviser Camille Lowman.

Big Dicktionary is a two-person, long-form improvisational comedy team composed of Timmy Finch and John Brennan.  The two share the stage and break many of the "rules" to entertain. Neither one is safe from the other as they keep the show tight and fast even as they call out each other’s foibles. Oh yeah, they use a very big dictionary in the show.

Come see Charleston's only all improvised rock show, where you, the audience, shout out the "titles" of your favorite DOPPELGANGER! songs, and have them performed for the first and last time ever. The Critics say:  "Lee Lewis and Jason Cooper are so good at what they do that the lines between fact and fiction may blur a bit during the show." - Jason Zwicker.  "It's a mix of VH1 Storytellers and Tenacious D" - Erica Jackson