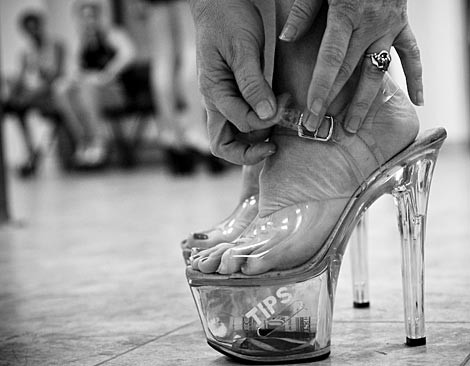 Image by Paul Zoeller/Summerville Journal SceneImage by 20090104-poll-dancing.jpg Ladona Sutherland straps on a pair of shoes before class begins. She says the shoes give the women more confidence and is actually beneficial in the workout routine.

Update January 26: And -- a few weeks later -- The Post and Courier has done their own text-oriented version of the story.

From the moment LaDona Sutherland strapped on her glass high heels I knew this was not the average fitness class. Then again the 10 poles standing in the middle of Goddess Dance Studio were the real clue. The studio, located in downtown Summerville, offers pole dancing classes.

A pole dancing class? Honestly, I imagined before class began a disco ball would drop from the ceiling as the room turned dark and smoky. And that, explains instructor Elizabeth Pike, is the stigma pole dancing classes have been fighting for years.

Wonderful pictures, and most certainly not your average dancing classes.

Go check out all the pictures over at The Summerville Journal Scene.