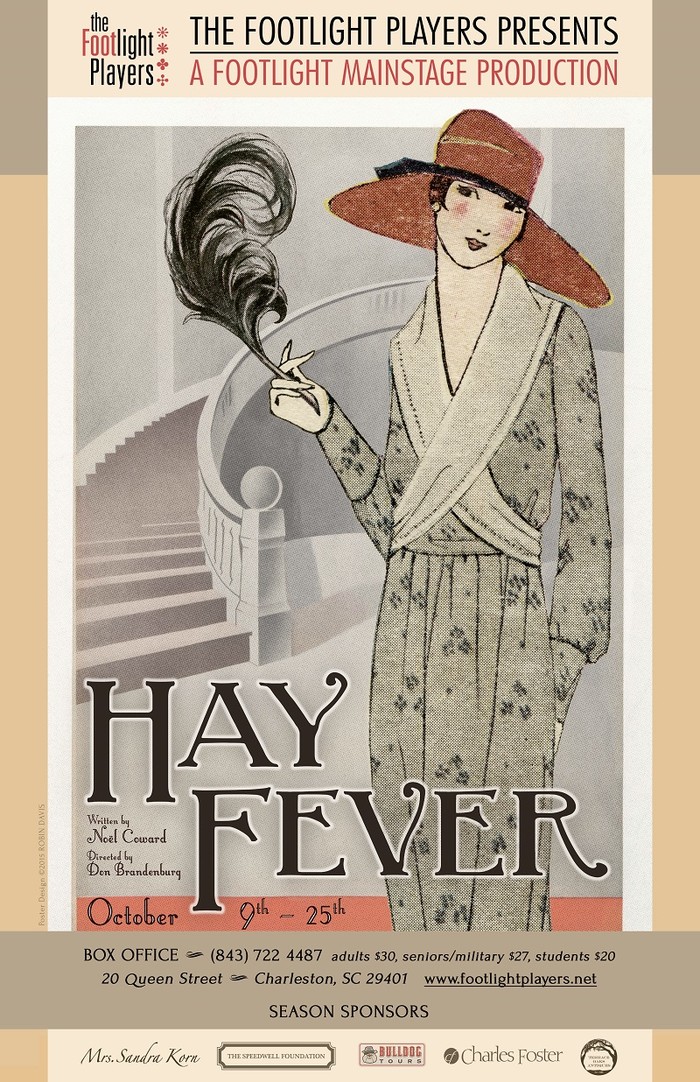 Meet the Bliss family: a retired actress mother, a novelist father and two adult children for whom all the world, literally, is a stage. Their outrageous antics alternately infuriate and astound their hapless weekend guests, all of whom have been individually invited up for a weekend tête-à-tête. Rousing fights, surprise engagements and fevered declarations of love drive the poor guests from the house, leaving the family happily bickering and playing amongst themselves as this comedy bounces to its inevitable and intoxicating end.

“Hay Fever” is directed by Don Brandenburg, an actor, director and producer with more than 75 shows to his credit. Although written in 1924, the play is incredibly relevant today simply because it is grounded in human reality, Brandenburg said.

“The dynamic conflict between etiquette and insanity, brought to life by vicious verbal fencing, reveals a human truth,” he said. “The antics of the Bliss family serve as a distorted mirror for the audience to explore the extreme possibilities of human behavior.”

Written one weekend in 1924, “Hay Fever” is one of Noël Coward’s earliest plays. Coward, who was 24 when he wrote the play, is presumed to have modeled the main character of Judith Bliss on American stage actress and silent film star Laurette Taylor, following a particularly memorable weekend spent with her and her playwright husband Hartley Manners on a trip to New York City.

The play is filled with deliciously eccentric characters whose banter is the sheer embodiment of Coward’s comedic style, which resides in the rhythms and melodies of his language, and less in deep emotional undertones.

As audience members watch the play unfold, Brandenburg challenges them to question whether our society even has a sense of etiquette any more.

He added, “What is normal? Will the absurdity of the Blisses be apparent to our generation? As you watch their story unfold, ask yourself, who do you relate to more, the eccentric Bliss family, or their supposedly ‘normal’ house guests? You may be surprised to find that what Coward considered absurd is more commonplace than you thought.”

An interesting side note about the casting in this show is that Lisa Benson is playing the role of Judith Bliss. Her grandmother, the late Fay Ball King, played this same role in 1975 with The Footlight Players back when its performances were at the Dock Street Theatre.

King graduated from the Theatre Guild School in New York and appeared in several plays on Broadway. She returned to her home state of South Carolina, performing in Columbia and here in Charleston. She also worked in television in New York and acting and directing in Yugoslavia and India.

Her granddaughter, Lisa Benson, recalls watching her grandmother in “Hay Fever” and in “The Importance of Being Ernest.”

“Now that I am older, I have thought how wonderful it would be to play the older leading lady parts,” Benson said. “I’m thrilled to have that chance and it’s even more fulfilling to play the same part my talented grandmother did four decades ago.”