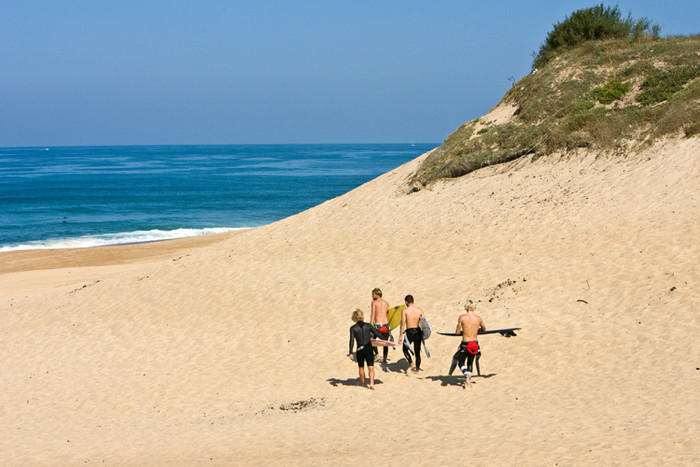 Floridian filmmaker and pro-surfer Mikey DeTemple is bringing his first film, “Picaresque,” to The Terrace Theater on James Island this coming Monday, May 18th.

Coming on the heels of Thomas Campbell’s surf movie premiere of “The Present” two weeks ago, The Terrace Theater is quickly becoming the favorite theater of many a Lowcountry surfer.

As TheDigitel’s resident surf enthusiast, I caught up with Mikey to talk about the film and what it means to be a surfer on the East Coast.

Austin Dandridge: So tell me a bit about the film and how it came about?

Mikey DeTemple: I have been a professional surfer for nearly 10 years now, going on trips all around the word and not really seeing them documented how I saw them.  It just really inspired me to do my own thing.  I went to Dustin Miller, my director of photography and asked him if he would be into shooting this project with me.  I had no budget for it and never made a film before so he kind of laughed at me- But here we are, two years later with a finished product.


Austin: The word "Picaresque" describes rascally characters, how does that relate to the premise of the film, or do you just like the word?

Mikey: I really liked the word, but when I found out the definition I was sold.  A band of nomadic roguish heroes?  Kind of sounds like what we were doing to me.  Traveling around the world, moving from place to place, living out of our suitcases for nearly 2 years.  It fits.


Austin: So who are some of the picaresque characters that are featured in the film?

Mikey: The thing I wanted with this film was fresh and new.  Something refreshing.  Not the same old what we have seen before.  The surfers really reflect in that, they’re a new breed of younger kids that are really the future of our sport.  Harrison Roach from Australia, one of the most well rounded surfers on earth can ride anything from literally a piece of wood to standard shortboard to a retro log. Christian Wach from California is one of the best noseriders on the planet.  Scotty Stopnik, another Californian and Rob Kulisek from New Jersey just to name a few of the diverse cast.


Austin: What was your most memorable experience during the making of?

Mikey: I'm originally from New York, so I would have to say the filming of that area.  The first trip was really foggy and we didn't get any good footage.  The second trip, the following fall, was flat, and I had everyone cancel their tickets.  Two weeks later an amazing swell was approaching, so I had everyone re-book everything and fly in.
We absolutely scored.  One of those days that only happens every few years.  It was just unreal to get it like that.


Austin: Where was the film shot? Did you do the majority of the shooting?

Mikey: The film was shot in Australia, Mexico, France, Costa Rica, Florida, New York and California.  My good friend Dustin Miller shot the majority of it, with some help from a few others.


Austin: Was it all shot on film?


Austin: What/who was the inspiration behind making a film; I hear they cost a lot of money to produce.

Mikey: Shooting this thing on film really broke the bank.  Between that and the music we chose it became quite the pricey project.  But, I really wanted to do this right and not take any shortcuts.  My inspiration to making this film was the lack of inspiration from others.  I really always imagined a beautiful surf film without narration, story lines and skits, just a no-frills straight surf film with amazing music.  Besides that, the surfers have really inspired me.  The guys I chose to be in this I chose for a reason.  They inspire me to want to go surfing, and if you see the film- I hope it will do the same to you.


Austin: It seems we have somewhat seen a revival of the classic "surf film tour" instead of releasing the films straight to DVD, why do you think this is?

Mikey: I remember as a kid some of these things would come to town when I lived in NY.  I would get so excited.  It would be the event of the summer and everyone would show up.  I really wanted to do something like that.  Show up to peoples home towns, show the film and excite everyone to go surfing.  It is summer, what better time to do so?

Austin: Lastly, some of your film was shot on the east coast of the US; do you think that most people who live in California are somewhat ambivalent to there being good surf over here? What are some of your favorite spots?

Mikey: I think some of the people from CA and Australia have really been freaking over the NY stuff.  It's really world class.  I'm not saying that New York hasn't been filmed before; I just don't think it has like this. I think it's going to surprise some people.  I love the Northeast.  I like to plant myself there every late summer-fall. The surf is great, the people are great and there are so many different places to surf.

It's great to see the revival of these films, and that they're getting some attention in Charleston, so come out and show your support.

The premiere is Monday, May 19th, at 8 p.m.at The Terrace Theater at 1956 Maybank Highway on James Island.