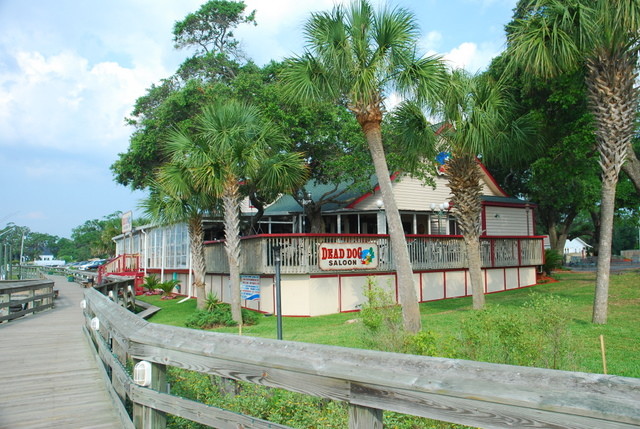 5:35 am on Wednesday May 16, 2012 | Posted by Paul Reynolds
Dead Dog Saloon destroyed by fire (Update: Ready for business this week)

Update May 16, 2012: Just to put a final wrap on this story, Myrtle Beach Restaurant News has photos and coverage of the new Dead Dog Saloon.

Working with Island Green Country Club﻿, On the Half Shell raised more than $15,000, which will be distributed equally to each of Dead Dog Saloon's 65 employees.

Head on over to WMBF News for their full write-up and video.

Update March 11, 2012: One thing nearly every local said when they heard the Dead Dog Saloon caught on fire was, "What about that big, old oak tree?"

The initial prognosis was not good for the southern live oak, but a recent brief from The Sun News has provided a glimmer of hope. The report also confirms the source of the fire was a still-lit cigarette thrown into a trash can. Read more details here.

Update February 29, 2012: WPDE reports that the Dead Dog Saloon is on track to re-open on July 1st. The detailed write-up is here.

Update February 26, 2012: While the owners work hard to get re-opened, the community has come together to make sure everyone is taken care of.

The Rolling Stones tribute show "Satisfaction" that was scheduled for Dead Dog Saloon is going to be hosted by Island Bar & Grill tonight. It's a 21-and-over show with no cover charge that starts at 9 p.m. We suspect "Gimme Shelter" might have a little more meaning this year.

More importantly is the welfare of the employees of Dead Dog that find themselves suddenly with a lot less income. Myrtle Beach Restaurant News reports that a fundraiser is being planned as quickly as possible.

First Report: At approximately 4 a.m. this morning, the Dead Dog Saloon of Murrells Inlet became engulfed in flames that are believed to have been started in the outdoor bar area.

The good news is nobody was hurt, the Marshwalk was not damaged, and the Dead Dog Saloon owners were already planning on renovating the building. Myrtle Beach Restaurant News has more details and a developing story with photos.

As we've pointed out before, the local media loves themselves a good structure fire. They also love being first on the scene and first out with photos and video.  Just four hours after news broke about the Dead Dog fire....

Based on the local social media chatter, Dead Dog was a beloved place for many residents.  As usual, we'll only update our story if significant details develop.

It is very sad that this saloon got destroyed o fire. I feel so sad for the owner of the saloon, but I am happy that the staffs were able to fix up the loss and reopen the saloon soon. Thank you for sharing directv select package