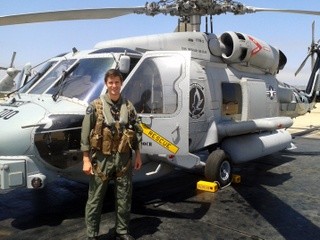 10:22 am on Friday November 8, 2013 | Posted by The Citadel
Citadel midshipmen move forward with confidence after special training

The Naval Reserve Officers Training Corps (NROTC) midshipmen at The Citadel are more focused and confident than ever after completing special, career-oriented training. Recently, 48 cadets from The Citadel experienced hands-on training that will be instrumental in their development as officers. A midshipman is an officer cadet or a commissioned officer of the junior-most rank in the U.S. Navy or Marine Corps.  For many the summer NROTC program represented their first exposure to the fleet and Marine Corps operations.

The Citadel’s midshipmen who are awarded four-year national scholarships have the opportunity to participate in summer training after their freshman or knob year, through the beginning of their senior year for a total of three summer training periods.  Each summer, the training for an individual midshipman becomes progressively more tailored to his or her desired area of service.

Following the completion of knob (freshman) year at The Citadel, Navy and Marine midshipmen participate in their third-class cruise, known as Career Orientation and Training for Midshipmen (CORTRAMID).CORTRAMID is a four-week program held in San Diego, Calif. and Norfolk, Va. During the summer furlough, The Citadel’s midshipmen participated in CORTARMID with hundreds of other midshipmen from universities across the nation.Each week of CORTRAMID is dedicated to one of four service communities – surface warfare, submarines, aviation and the Marine Corps. The midshipmen rotate through each of these training periods and receive valuable insight as to which community they will choose to pursue. It is a once-in-a-life-time experience.  During one month of training a midshipman will fly in a naval aircraft, submerge in a submarine, take the helm of a US warship and receive basic combat training with the Marine Corps. CORTRAMID is an eye-opening experience for these midshipmen. It is not uncommon for a midshipman to change his or her option from Navy to Marine Corps, or vice versa, when they return for their sophomore year.

In addition to CORTRAMID, the NROTC unit at The Citadel also promotes summer foreign language programs. Just at the Navy is focused on developing officers with multi-language proficiency, regional expertise, and cultural awareness (LREC),NROTC encourages midshipmen to explore summer training options allowing them to excel in those areas. For example, in the summer of 2013, two of The Citadel’s Marine-option midshipmen participated in a Department of Defense fellowship in the University of Virginia’s full-immersion Arabic program. For Navy-option midshipmen,the second-class cruise after their sophomore year is geared toward understanding the daily life of an enlisted sailor. The platform options for second-class cruises are typically limited to surface vessels and submarines and last between three to four weeks. Occasionally, due to the operational requirements of ships, cruises have the potential to last much longer.

Midshipmen are assigned an enlisted running mate who shows them the ropes. Midshipmen see how damage control drills are run and they participate in simulated general quarters.  Second-class midshipmen also receive training in man-overboard drills, gun range practice and underway replenishment (UNREP) procedures. UNREP is a process supporting fleet units that must remain at sea for long periods of time with fuel, ammunition, provisions, and spare parts. Typically, second-class cruises debark from ports within the United States, but some midshipmen have the opportunity to meet their ships overseas. MIDN second class Otto Quintero joined USS Chosin (CG-65) from Pusan, Korea and then steamed to Sasebo, Japan where he disembarked after three weeks at sea.

Marine-option midshipmen have the opportunity to participate in cruises aboard amphibious ships or in Mountain Warfare Training School in Bridgeport, Calif. between their sophomore and junior years. Recently, seven of The Citadel’s Marine-option midshipmen participated in the two-week mountain warfare training course, where they learned a multitude of survival skills that can be used in mountainous terrain.  Typically, Marine operational units undergo this training prior to deploying to Afghanistan.

For the Navy midshipmen, the first-class cruises offer the most variety among the service communities. Midshipmen usually have the option to choose from conventional surface, surface nuclear, submarine, aviation, special warfare (SPECWAR), explosive ordnance disposal (EOD) and foreign exchange (FOREX) cruises. Due to budgetary constraints as a result of sequestration, funding for foreign exchange cruises was cut in the summer of 2013. Midshipmen are encouraged to select the type of cruise that best corresponds to their desired area of service. Therefore, someone desiring to become a pilot or naval flight officer (NFO) would go on an aviation cruise. The first-class cruise is also a requirement for commissioning. A total of 12 Navy-option midshipmen from The Citadel participated in first-class cruises including conventional surface warfare, surface nuclear, submarine and aviation cruises. Two first-class midshipmen went on fast-attack submarine cruises, where they participated in training exercises ranging from periscope operations to shipboard firefighting procedures. The four who participated in aviation cruises experienced flight in five different types of naval fixed-wing and rotary-wing aircraft. MIDN first class Matthew Arend, who was assigned to VAW-124 in Norfolk, Va., actually helped the crew of an E-2C Hawkeye deal with a real aircraft emergency by reading out steps from the pocket checklist.  MIDN first class Craig Cardin experienced one of the most robust first-class cruises.  He connected with USS Harry S. Truman (CVN-75) out of Norfolk for a three week cruise.  During his time on the aircraft carrier, MIDN Cardin was able to tour the ship’s reactor spaces and engineering control center.  He stood watch under instruction as the conning officer on the ship’s bridge. He joined the catapult and arresting gear officers (Shooters) in their duties during flight operations.  He received hands-on training from the onboard EOD team.  Although he did not defuse any live ordnance, he was able to familiarize himself with a lot of the gear they typically use. MIDN Cardin also had the opportunity to ride in a helicopter during flight operations and spend time with the aviators in their ready rooms.

Marine-option midshipmen are required to go to Officer Candidate School (OCS) in Quantico, Va., during the summer prior to their senior year.  That six-week course evaluates the midshipmen’s leadership capabilities, physical fitness and academic performance. For many Citadel Marine-option midshipmen, OCS is the most challenging hurdle on the path to receiving a commission as a U.S. Marine Corps officer. During summer furlough, seven of The Citadel’s midshipmen completed the rigorous course. The NROTC summer training program is a vital element in the developing careers of these young men and women. It is an opportunity for them to apply what they have learned during the academic year in real-world scenarios. The program helps build the midshipmen’s confidence as leaders while continuing to generate genuine interest in the Naval and Marine Corps services; exposing them to what they can expect after they graduate and become commissioned as officers.

About the author: Lieutenant Brendan Schaaf is the Senior Naval Instructor and Summer Cruise Coordinator at NROTC Unit, The Citadel