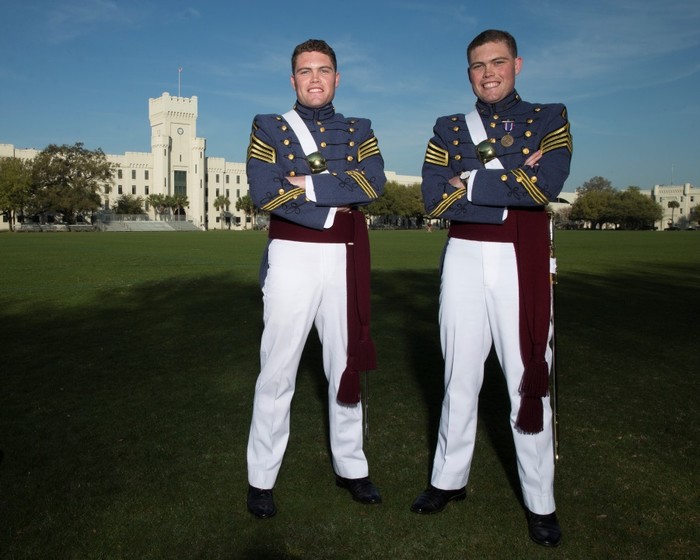 The unbreakable bonds that develop between cadets during their four years at The Citadel are legendary; the close relationships are often touted one of the top benefits of being a member of the South Carolina Corps of Cadets. Every year for almost 175 years strangers show up for their first day as a freshmen and have already formed life-long bonds by the end of the first week. But there is a small group of cadets who bring their built-in best friends with them.

Identical twin brothers John and Wilson “Wil” Hope graduated from The Military College of South Carolina as members of The Citadel Class of 2016. That wasn’t always the plan. Until March of their senior year at Byrnes High School in Duncan, South Carolina, neither brother intended on going to The Citadel—they both had other (and separate) schools in their minds. But after they applied and both received full academic scholarship offers, both decided to commit to The Citadel.

“I was really impressed by the fraternity of the alumni and the fact that I would have to earn my way to success; this combined with our family’s military history, my desire to serve in the military, and our scholarships all sealed the deal,” said John.

The twins, who grew up in Spartanburg, South Carolina, were assigned to separate companies and battalions when they arrived.

“Even though we were in different companies, I used to get yelled at for not saluting Wil’s senior officers from F Troop our knob (freshman) year because they thought I was him,” John said. “As upperclassmen, the TACs would congratulate me for something that my brother did, or ask me to do something they really needed him to do.”

Despite the separate companies, they still spent a lot of time together. “John and I had the same major, were in the same clubs, had the same friends and interests, and have both held the same positions within the Corps. We even studied abroad at the same time, as roommates. We are about as ‘twin’ as twin can get,” said Wil.

The South Carolina Corps of Cadets, which generally consists of about 2,300 men and women, has had numerous sets of twins over the years. Fraternal twins Ellison Smith, IV and Augustus Smith, II also graduated together with The Citadel Class of 2016. Their father, Ellison Matthew Smith, III, presented their diplomas because he, too, graduated from the college. The twins both majored in business administration. Ellison is going to work as a supervisor at an asphalt company while Augustus is joining the National Guard. Their father, Class of 1981 alumnus Ellison Smith III, said, “They were signed up to go to The Citadel before they were born.”

The Russo twins graduated in May 2015 with a degree in criminal justice and both accepted jobs with the Greenville County Sheriff’s Office. “We never planned to go to the same college—it just worked out that way. We’ve always done mostly the same things, but just in different ways,” said Joey.

John added on: “We always played the same sports and had similar friend groups. I think one reason we always have done similar things is because we are so competitive. We know that the other one brings out the best in the other, and so neither one of us will let the other give less than 100 percent.”

The Citadel was the perfect place to channel this competitive spirit. They competed in the triathlon club sophomore year, were members of the criminal justice society, and were company representatives as part of the Summerall Guards.

“To students looking into The Citadel—it won’t always be fun and you won’t get to do all of the ‘normal’ college stuff that your friends do, but if you want to stand out in a world where everyone is doing the same stuff, then The Citadel is the place to go,” said Joey, the older twin by 30 minutes.

Since graduating and joining the Greenville County Sherriff’s Office, John took a break from his career in law enforcement to help out at the family business while he is pursuing officer candidate selection in the Army. Joey still helps out with the business on his off days from the police force, keeping it a family affair.

Michael High, a member of The Citadel Class of 2017, is experiencing a vastly different college career than his identical twin brother, Matthew, who will graduate from the University of South Carolina. Michael is pursuing a bachelor’s in business administration, following in his father’s footsteps by going into the business-side of healthcare. (Pictured above from left to right: Michael, sister Ann Elizabeth, Matthew)

“I honestly did not even decide to come to The Citadel until the end of my senior year in high school. One of our best friends in high school, Will Young, is a legacy cadet and convinced me to choose The Citadel. My dad loved the idea, but my mom was more skeptical—she wanted us to go to the same college,” said Michael.

Despite the 120 miles between the brothers, they still see each other often. Originally from Sumter, South Carolina, and inseparable through high school, they try to meet at their house once a month.

“We also talk pretty much every day through group messages, and we both had friends from high school that went with us to college which has helped. I think we would still choose to go to separate colleges if we could decide again,” said Matthew.

“The Citadel is completely different than any other college around. It can be hard to see Matthew experiencing much more freedom, but I am getting structure and time management skills that will be helpful for my future jobs. And the networking at The Citadel is priceless,” said Michael.

The end of an era for the Hope twins

With the close of the 2015-16 academic year, John and Wil departed through The Citadel’s Lesesne Gate as alumni for the first time, ready to enter the real world where they will live in different locations for the first time in their lives.

Just before graduating, John was commissioned in the U.S. Army as a field artillery officer and will join the 2nd Cavalry Regiment in Vilseck, Germany, after attending the Field Artillery Basic Officer Leadership Course in Ft. Sill, Oklahoma.

“I plan on eventually going to graduate school to study foreign relations while pursuing a career in the Army or the Foreign Service in the State Department.”

Wil was awarded a Foreign Language and Area Studies (FLAS) Fellowship through the University of North Carolina-Chapel Hill which will fund an academic year of Turkish study along with graduate studies in political science through the Transatlantic Master’s Program.

“My concentration is Turkish and German Studies. I will be spending my first semester in Chapel Hill, the second in Ankara, Turkey, and the last year in Berlin. This summer I am also planning on using another FLAS scholarship to begin my intensive Turkish regiment here in the States.”

When will the brothers be reunited again?

“I think one day we might end up in the same city—a long time from now. We both have similar interests, so it’s possible, but with our careers being so drastically different that’s definitely in the long-term,” said John. “We’d both like to live and work in western or central Europe, and I think that one day we’ll be reunited.”

Megan Campbell, a native of Clemson, South Carolina, is a graduate assistant in the Office of Communications and Marketing at The Citadel. She received her undergraduate degree in graphic communications from Clemson University in 2010. Campbell is currently pursuing her master’s degree in secondary education with a concentration in English and hopes to graduate in December 2016.