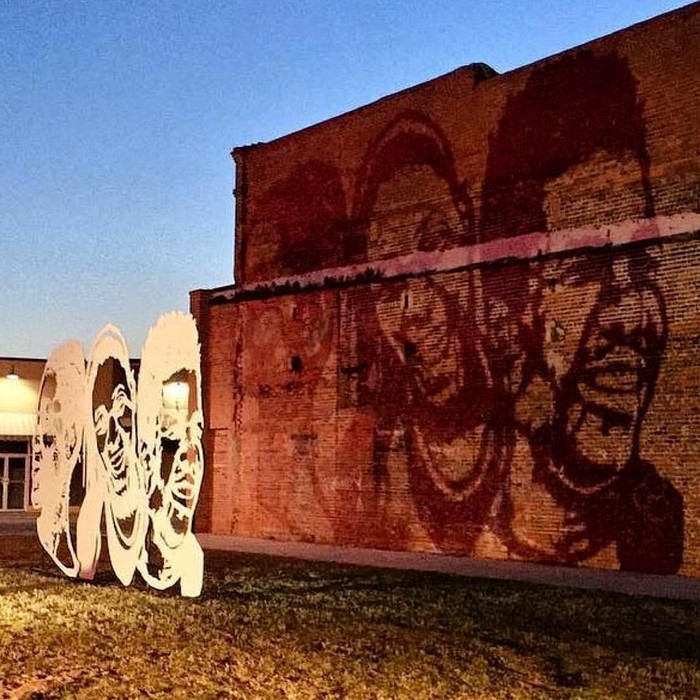 Joseph Dreher’s submission at ArtFields was a 144-foot by 288-foot piece titled "Not a Mural Mural."

12:04 pm on Wednesday May 3, 2017 | Posted by HAF Creative
Charleston Parks Conservancy Selects First Artist for Art in the Parks Program

The Charleston Parks Conservancy has awarded its first ArtFields exhibition prize. Artist Joseph Dreher of Decatur, Georgia, received the award at the conclusion of the event on Saturday in Lake City, S.C. ArtFields is an annual art exhibit and competition showcasing the work of artists around the Southeast.

Dreher’s submission at ArtFields was a 144-foot by 288-foot piece titled "Not a Mural Mural," portrait stencils carved out of veneer plywood. He will receive a $5,000 cash prize from the Conservancy and will be invited to create a work of art to be displayed at a City of Charleston park later this year.

An architect, photographer and poet, Dreher describes himself as a “social artist.” He says, “My work is about celebrating people and community. I use a number of tools and media to create my work, including photography, murals, street art, wheatpaste, painting, sculpture, architecture, and poetry to name a few. People are my primary interest and it is my appreciation for people that informs so much of my creative work.”

The award is part of the Conservancy’s new Art in the Parks initiative, an effort to install temporary public art displays in Charleston city parks through collaborations with other arts organizations, including Artfields, the City of Charleston Office of Cultural Affairs and and the nonprofit Redux Contemporary Art Center. The Art in the Parks program also will offer educational opportunities and artist-led workshops for adults and children.

“As part of our mission to inspire Charlestonians to connect with their parks, we want to make contemporary art that is accessible to all of our citizens and provides another reason to visit the stunning parks that Charleston has to offer,” said Harry Lesesne, executive director.

The exhibition award was made possible by The Speedwell Foundation, Employees Community Fund of The Boeing Co., The Joanna Foundation and the Henry & Sylvia Yaschik Foundation.

Founded in 2007 by philanthropist Darla Moore, the Conservancy is celebrating a decade of connecting people to their parks and creating stunning public spaces and strong communities throughout the City of Charleston.

Through a public-private partnership model, the Conservancy works with the city’s Parks Department as well as community leaders, neighborhoods and engaged citizens to transform and activate the city’s parks and green spaces. The Conservancy is currently working in 25 parks, including Colonial Lake, Allan Park, Wragg Square, McMahon Playground at Hampton Park, Magnolia Park and Community Garden, Marion Square, and Medway Park.