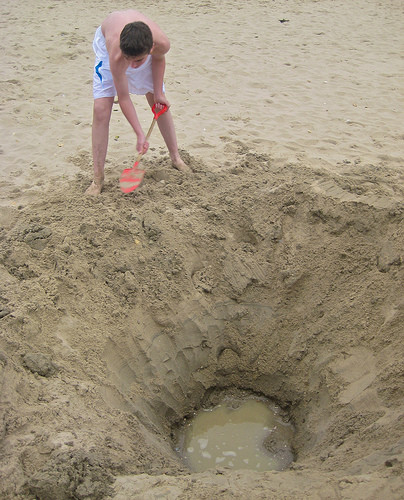 Update July 6, 2012:  The Carolina Forest Chronicle has pulled together a lengthy list of public grievances against the Cottonpatch operation, alleging it was, indeed, a sand mind.

You can read the full article here.  It includes information about a cease and desist order, failed DHEC inspections, and some pretty compelling photos.

Update June 26, 2012: Cottonpatch is still not a sand mine says the Southern Asphalt despite complaints filed by Horry County regarding the 'retention pond.'

The Carolina Forest Chronicle have been on top of the issue and in a recent write-up they say, "A DHEC letter the Chronicle previously obtained through the FOIA states that DHEC considers digging operations to be mining anytime a company exceeds permitted digging depths." ﻿The Chronicle piece has some more information regarding Cottonpatch, including news on trucks hauling in material called gumbo clay that is being used to fill in the non-sand mine hole back to its approved depth.

Additionally, I have been back there and in my opinion that is going to be one hell of a pond...if you can find your way back there and check-in with FourSquare.

SCnow.com has a report about suspected sand mining under the guise of building just a retention pond for the subdivision. Coincidentally a sand mining request was denied last year. We spoke with Harry Wynn, a Waterford Plantation resident that lives near the work zone who says that work starts at 6:45am and lasts for twelve hours, "There are a few Southern Asphalt trucks that move sand out of there, most are Blue Max or other third parties."

We'll keep on top of this story and have an update next week; until then, head over to SCnow.com to read their full write-up. Also, checkout their broadcast on this topic below.