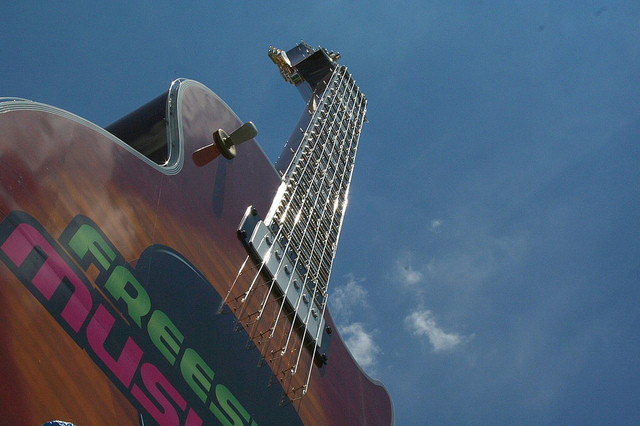 Update, February 16, 2012:  A $20 million mortgage has been granted to the new owners of Freestyle, which some speculate could mean a comeback.

This Carolina Forest Chronicle article has the history of the park's financials and details on who now holds the mortgage.  The possibility that the new infusion of money may not result in the reopening of the park exists, but doesn't seem likely,  When you add this to the news that the Waccamaw Pottery was recently purchased with plans for revitalization, it feels like there may be hope for this once booming area to rise to greatness again.

Update October 2, 2011: Why did the theme park fail twice? What can the new ownership do to make it a success?

Dawn Bryant of The Sun News dug deep and spoke with local economists and experts on the answers to those questions. Read it all here. The obvious answer is that the old parks would easily cost a family of four almost $200 for only an hour or so of entertainment. The next group that wants to make a sincere effort will need enough capital to float the operation for a year while they build up the entertainment value and justify the theme park prices the former owners wanted to charge.

Update August 3, 2011: Color us surprised. The group that mortgaged the Freestyle Park has purchased the property with intentions of re-opening next year.

It's not a done deal just yet. Namely, they are looking for an operating partner to run the park and it will still be for sale to anyone that wants to take it over. The Sun News got the scoop and has all the details about the possible re-opening date. Read it all here.

See the original report we posted below to learn more about the troubled park's past. You can also read about the parks troubled past on Freestyle Music Parks Wikipedia page.

First Report: The Hard Rock park had it's grand opening three years ago today on April 15, 2008. Most locals know what has happened in the seasons that followed. But what will come of the old Pottery location?

Joel Allen of WPDE briefly talks about the history of the park and what future may lie ahead for the defunct operation. As usual, his article has some great links including one to a Facebook group of former Freestyle employees. See it all here.