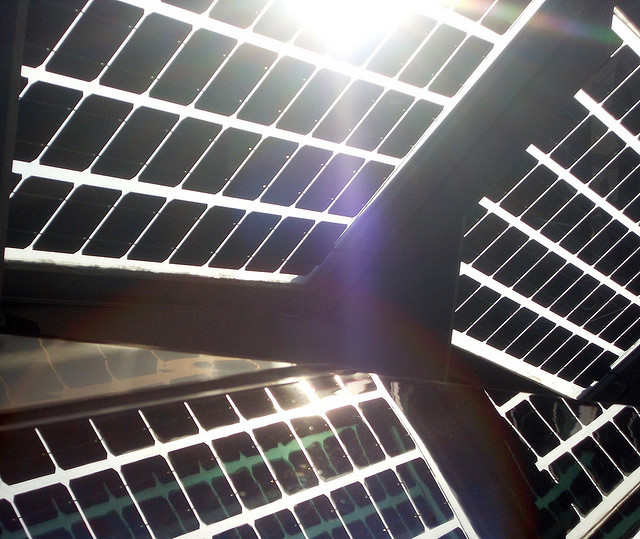 In recent weeks the solar industry has gotten an undeserved black eye thanks to the bankruptcy of a California based solar company, Solyndra﻿. But one Garden City solar business is seeing green in more ways than one.

SCnow.com visited Solar Plus Energy Pros﻿ of Garden City this week to discuss the solar industry and the impact that Solyndra, the now expired Department of Energy loan-guarantee program﻿ for, "innovative clean energy technologies﻿" and the future of the solar industry.

Watch the SCnow piece below and read the full write-up over on their site:

With the fall out of Solyndra what does the future hold for Solar?

According to the Center for American progress there are already 2.7 million jobs across the clean economy﻿ and:

Across a range of clean energy projects, including renewable energy, transit, and energy efficiency, for every million dollars spent, 16.7 green jobs are created. That is over three times the 5.3 jobs per million dollars that are created from the same spending on fossil-fuel industries.﻿

Furthermore, the U.S. Solar Industry currently employs roughly more that 20,000 workers than the Steel Industry, and these jobs are here and not being shipped over seas to China.

But what about here in MYR?

We have already seen progress from both city and local business in the green economy, from the prospect of off-shore Wind Power to the expanded use of solar power by Santee Cooper. Also, just recently local restaurant, Sunshine Cabana in Murrells Inlet﻿ has gone green offering cups made of corn instead of plastic and other initiatives.

Like with the family pet, there is a whole industry now dedicated to eco-tourism﻿. Tourism is one of the largest economic sectors in the world, virtually every business in some way relies on it and coincidentally﻿ so does the Grand Strand:

Eco-tourism is growing at three times the rate of the overall tourism sector itself, and demanding more knowledgeable workers committed to sustainability.﻿...Green travel employees generally work for private companies, government, public institutions and nonprofits. But, as ecology becomes more of a mindset in today's culture, hoteliers, restaurateurs and area attraction operators will all be going green to attract green-thinking travelers.﻿

What say you loyal MYR readers? Could the green economy be one of the answers for the this area and hopes for higher wages?

More on the Green Economy: