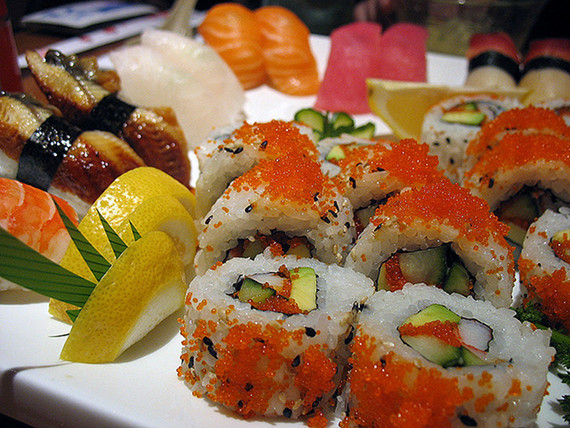 This just in from the powers that be at REV Foods: sushi.

Izayaki is a Japanese word for, as Wikipedia puts it, a "Japanese drinking establishment which also serves food to accompany the drinks. They are casual places for after-work drinking."

Update June 25: The Charleston City Paper writes that the three month rennovation is nearly at an end — rather, that it will end, tomorrow, June 26, when Izayaki Hiro will introduce a new deck and some potent new fresh foods.

Update October 23: After 20 years of sushi at Hiro on King Street, Sushi Chef Hideya Isibashi has decided to retire. REV will now be taking full ownership of the business.

REV is moving forward with a concept that has a more relaxed, exciting atmosphere and a full bar that is true to a traditional izakaya and undoubtedly true to REV. The space will be closed for the remainder of this week and reopen again on Monday, October 29th at 11 a.m.

Chefs Will Fincher and Mae Jordan are collaborating to create a noodle and grill centered menu that can easily transform from sharing with one person to sharing with a group. Izakaya Ramen will continue to serve yakatori, tempura, and rice dishes along with many Japanese appetizers, but the bulk of the menu will come from the multiple noodle dishes with your choice between five noodle types and will all be attractively priced. The yakatori grill in Izakaya Ramen is the only one of its kind in Charleston and Jordan and her team can now be seen from a new high top bar showcasing their skills on it. The menu will continue be served late for the many night owls of our great city.

The drinking vinegar's will remain on the cocktail list, the sake list will be limited and a full liquor bar will now be available. Izakaya Ramen will have a late night happi awwa (Japanglish for drink specials) and various nights featuring specials for the many industries that get left out of 'food and bev' focused nights at many restaurants and bars. We will also offer deals for the cyclist and bike enthusiast, but if four wheels is more your style, we will validate parking 7 days a week.

New additions to the space will include ten televisions where patrons can catch up on the latest anime flicks, sumo matches, international sports and Japanese game shows. Izakaya Ramen will host karaoke nights and sudoku competitions and your server may even teach you how to make an origami creature or two. The community table is a staple in all REV locations, it has been most notably missing in Izakaya and we are excited to announce that a 10 ft table adorned with pages from Japanese magazines will be making its way into the building.

Update December 4: Eater Charleston is reporting that after only 35 days in business, Izkaya Ramen has closed.

No word yet on exactly why the quick shuttering, but we'll be sure to keep you updated as we find out more.